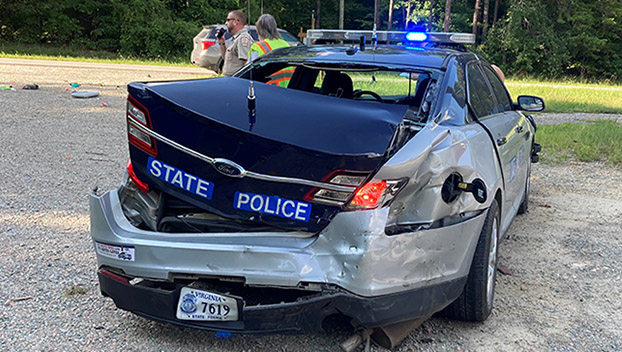 A look at the back of Trooper Martin's Ford Taurus.

On Wednesday, Aug. 24, Virginia State Police Trooper G.D. Martin was heading down Route 60 in Cumberland County. Just after 4:30 p.m., Martin slowed down in his Ford Taurus to turn into a gravel lot east of Route 654. The Dodge pickup truck behind him slowed down as well. However, a third vehicle, a 2003 Nissan Frontier behind the pickup, didn’t follow suit.

According to Virginia State Police, the Nissan was going too fast and drove onto the right shoulder of the road to avoid the Dodge. The Nissan then hit the back of Martin’s Taurus.

VSP officials said Martin was taken to Chippenham Hospital for treatment of non-life threatening injuries. He has since been treated and released.

The driver of the Nissan, 54-year-old Randolfo W. Santos, was not injured in the crash. Virginia State Police have charged Santos with driving without a license, reckless driving and improper passing on a shoulder.