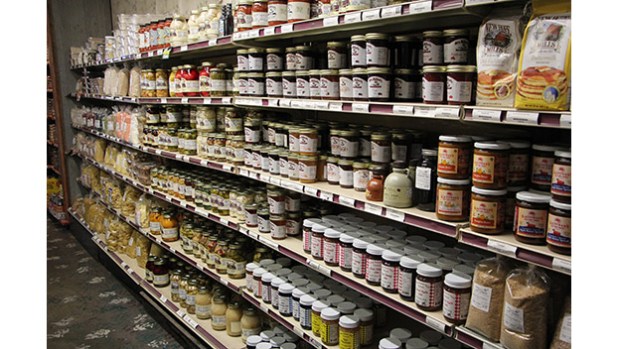 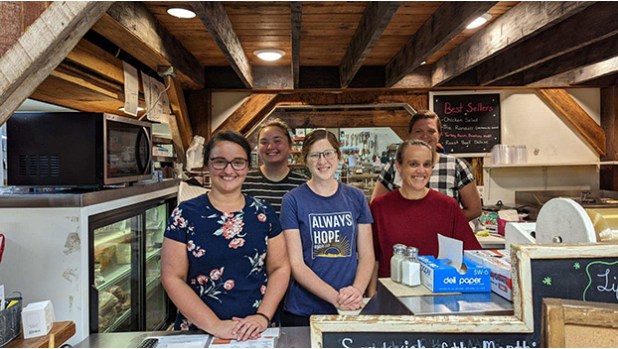 Above, pictured are a few of the staff members at Miller’s Country Store, from left, front row, Amy, Cheyanne and Carrie. Back row, Sara and Jolene. 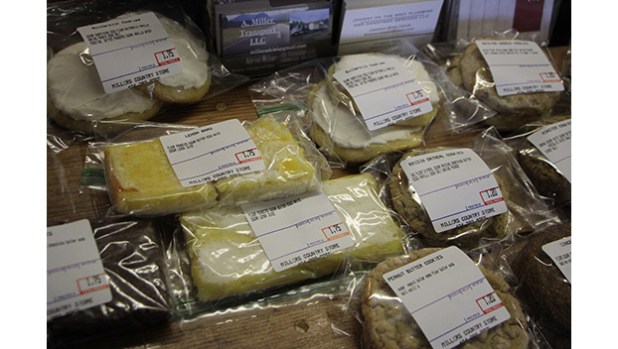 From whoopie pies to cookies and lemon bars, a trip to Miller’s Country Store isn’t complete without being tempted by some sweet treats. 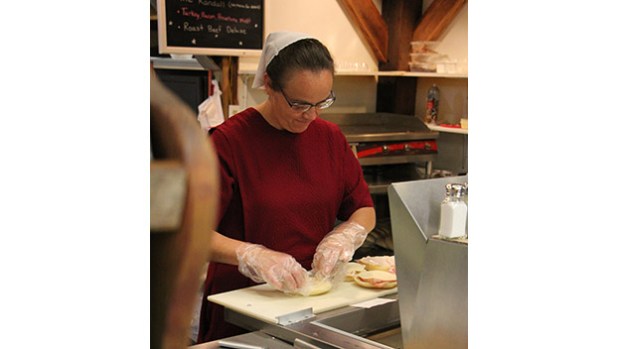 Sandwiches are made to order. Pick an item off the menu, or get creative and order your personal creation go-to. Carrie is making a sandwich for a customer. 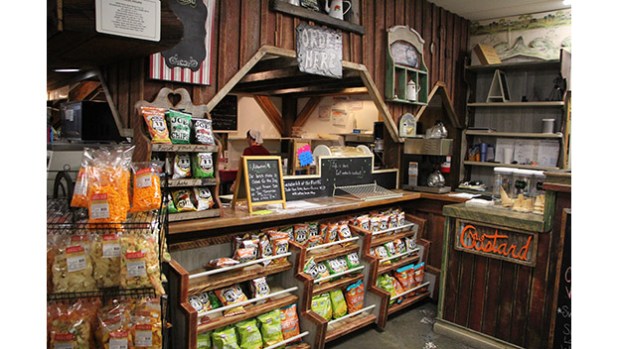 The ordering counter for the deli that is near the back of the store. 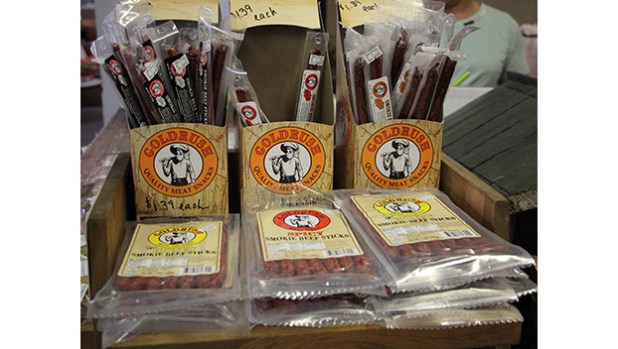 Miller’s Country store offers many unique snacks that are hard to find. 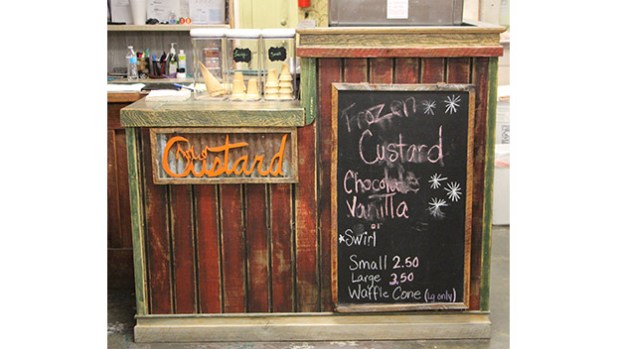 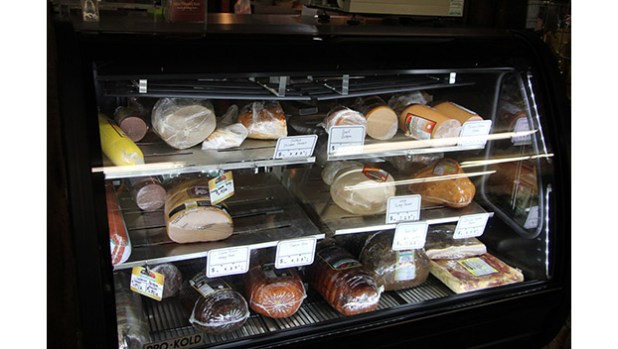 Sandwiches at Miller’s are stacked high with freshly sliced deli meats and cheeses. Manager and Co-Owner Amy Miller says the deli is one of the most popular parts of the business. 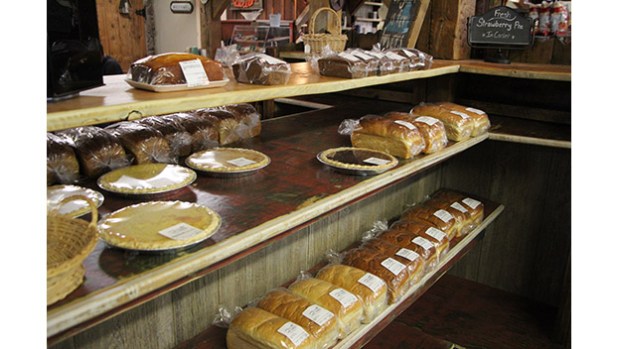 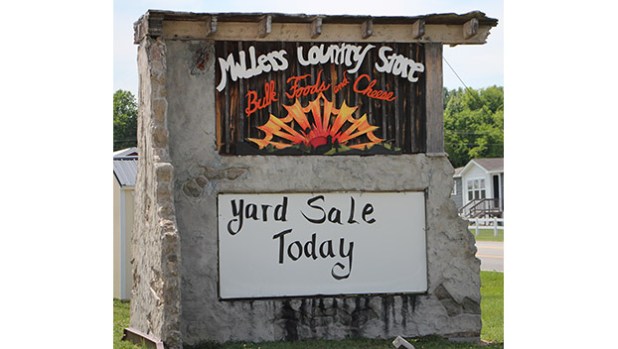 Miller’s Country Store has found its way into the hearts and bellies of folks across the Farmville area. For more than two decades, this local grocery store and deli has been stacking sandwiches high and captivating customers with an unbelievable variety of mouthwatering, homemade desserts and unique products you just can’t find anywhere else.

Today, it’s hard to find anybody who hasn’t stopped into this charming country store for a fresh donut or a carton of Farmville-raised eggs. However, it may surprise some that this successful and bustling business started off as a tiny shop run out of the Miller family’s own home.

According to Manager and Co-owner Amy Miller, Miller’s Country Store began in the 90s when Amy’s parents and fellow co-owners, Albert and Anna Miller, opened up a tiny, one-room store out of their home in Cumberland County. Back then, the family just sold a few bulk food items and some produce plus some meat and cheeses.

In August 2000, opportunity struck and the Millers moved the business out of their home and into its current location at 2737 W. Third Street in Farmville, opening up the store to a larger customer base and the chance to offer a much wider variety of products. In 2014, Amy joined her parents to work at the store as the manager. By 2018, she’d become co-owner.

“Little by little, it’s grown,” Amy commented, recalling the evolution of the store.

Today, Miller’s Country Store draws in patrons from counties over, and it’s not hard to see why. The business is renowned for its popular deli counter where hungry customers can order sandwiches with freshly sliced meats, cheeses and veggies or a juicy hotdog complete with all the fixins. There’s also crisp, freshly cut salads and generous sides such as pasta salad, potato salad, chicken salad and hearty, seasonal soups.

“I would say probably one of the biggest draws is our deli,” Amy noted.

If you’ve got more of a sweet tooth, don’t fret. The store is overflowing with an array of delectable baked goods made from scratch. There’s always several different flavors of seasonal cakes, pies and cookies to choose from, not to mention the ever-popular cinnamon rolls and raspberry rolls. You could always try one of the store’s infamous whoopie pies, and no bakery is complete without several different types of bread such as sourdough, white, multigrain, cheddar and herb and cinnamon raisin, just to name a few.

Miller’s Country Store is also a great stop for grocery staples such as flour and sugar, and the business is known across the area for its specialty items that folks just can’t get anywhere else, such as old-fashioned candies and other unique snacks.

According to Amy, the Millers also like to keep a lot of their produce Farmville-centric, including items such as local honey and eggs. The store also sells items such as vitamins and essential oils, not to mention a selection of Farmville souvenirs such as T-shirts and cups.

The bustling business is run by a mix of approximately 15 part-time and full-time employees. And while Amy’s parents are currently enjoying their retirement, they can often be spotted helping around the store or on Saturday mornings when making homemade donuts. Amy’s young niece, Lily, has even started to help out around the shop, marking the third generation to have a hand in the family business.

With so many delectable items for sale and a menu of seasonal treats that keep things new and exciting, it’s no wonder why customers continually come back for more. But it’s not just those delicious sandwiches that keep people walking through the door; the staff members at Miller’s provide a quality of customer service that just can’t be matched.

“One of the things that we really strive for is friendly customer service and making people feel at home and welcome,” Amy stated. “That’s something we want to give the customer; the best experience.”

When asked what it means to have been able to serve the Farmville area for so long, Amy was quick to point out the many friendships made.

“It’s an honor,” she said. “We’ve made a lot of friendships that we wouldn’t have had if we didn’t have the business… I just love that part of a small town.”

Of course, for Amy and the rest of the team, it’s always a pleasure to see those smiling, familiar faces come through the door each morning.

“We have quite a few of our regulars who are just like family.”