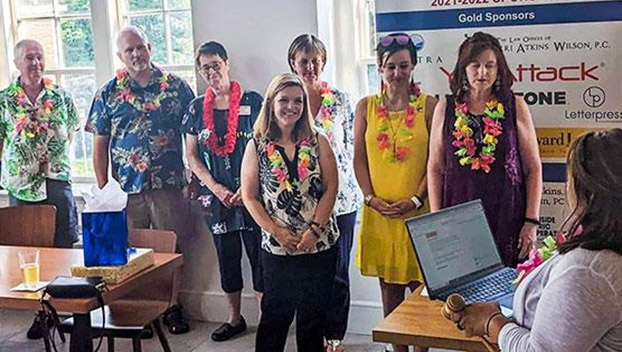 FARMVILLE – At their latest meeting, the Farmville Rotary welcomed in a new leadership team. But first, the group handed out several awards. These are for members who made remarkable contributions to the club’s service projects – including raising $120,000 for the Friends of Barnabas Foundation.

The foundation provides healthcare for communities in remote areas of Honduras, hosting the Taste of Farmville program to raise money for local non-profit organizations, two blood drives, donations for Operation Christmas Child and Piedmont Senior Resources’ Santa for Seniors Program, among others.

Rotarian of the Year – Patti Wagner;

Shout-Outs of recognition to – Bill Bergen and Sue Carter.

Outgoing President Jenn Kinne made the award presentations and also spoke about the club’s service to the community, both at the club level and by individuals. Kinne summed up highlights of the year before installing the new president, Joy Stump. She gave an upbeat talk – noting that one of her priorities for the year is to highlight the teachers in our school systems.

In addition to Stump, the new leadership team for the Farmville Rotary Club includes:

The Rotary Club of Farmville meets Thursdays at noon at The Woodland and Thursdays at 5:30pm at Three Roads Brewing.