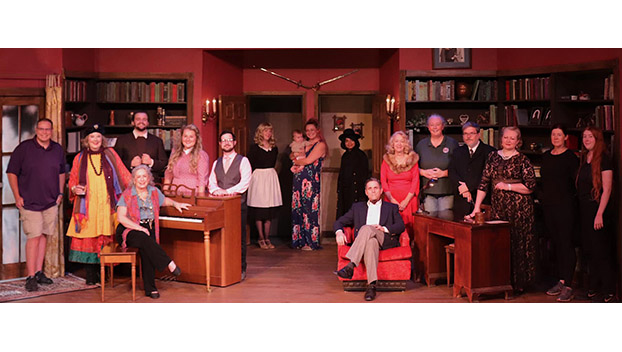 The cast and crew of the current show at Waterworks Players, The Musical Comedy Murders of 1940.

If you’re looking for a hilarious and joyous end to July filled with slapstick comedy and absurdly unfolding mayhem and the chaos of Whodunits and Whoizits, then treat yourself to the local Waterworks Theatre production of “The Musical Comedy Murders of 1940.” Oh, did I mention there’s a masked killer (note the fourth word in the title) who sets things in motion right from the start and then returns again and again, helped by hidden bookcase openings and secret passages that allow terrifically executed exits and entrances? Everyone involved in “The Musical Comedy Murders of 1940” deserves a spotlight for their talents in the self-referential farce of Agatha Christie-type murder mysteries and inoffensive musical comedies.

The play opens in the library of the Grossenknueten estate in Chappaqua, a quiet hamlet 30 miles north of New York City. It’s December 1940, and a blizzard is building outside the mansion, bringing unfortunately timed power outages. The first murder in “The Musical Comedy Murders of 1940” happens on stage almost immediately, but the assailant is masked and slips away. Soon after, theater folk connected to the new play “White House Merry-Go-Round” arrive, as does the first murder victim, now oddly unharmed and unfazed. In an insightful twist, one of the characters soon realizes that the producer, the director and the creative team of a lyricist and a composer had all been connected with “Manhattan Holiday,” a Broadway flop and the subject of scandal two years prior after the murders of three chorus girls by a never-captured assailant dubbed The Stage Door Slasher. Unable to escape the mansion during a blizzard, the theater folk fear the Slasher is now among them. The characters–and we in the audience–spend the next two hours uncovering hidden doors, secret passages, multiple identities, and shifting accents, trying to solve the murders–yes, now plural.

The cast, most of whom are seasoned Waterworks favorites, is stellar. Dionna Welton-Boxley portrays the masked figure with eerie and chilling catlike movements.

Penny Dorsey wonderfully portrays Helsa Wenzel, Elsa’s maid. At the risk of giving away too much, Penny as an actress is gifted and mercurial enough to switch characters in an instant and make each believable.

Maryska Connolly carries herself brilliantly as Elsa Von Grossenknueten, the eccentric owner of the mansion, wealthy enough to financially back a dozen plays per theater season. Maryska’s stage presence is subtly regal and yet approachable.

Billy Tucker plays Sgt. Michael Kelly, replete with shoulder holster, a high-register Irish accent, and a no-nonsense determination to identify the mysterious murderer and solve two cases at once.

Elijah Logue embodies Irish tenor Patrick O’Reilly with self-assured flair amidst the assembled actors offset by a subtle drift to the background as he scrutinizes everyone, sensing something afoot.

Jordan Whiley fully embraces Ken de la Maize, a charismatic and self-aggrandizing Hollywood director of theater and motion pictures. With his honeyed voice, he effortlessly doles out false flattery while saturating his conversation with names of famous actors he’s worked with in productions that haven’t yet been made. Stage and film buffs will delight as Ken namedrops dozens of 1940s actors, such as Alice Faye, Peter Lorre, Myrna Loy and Phil Silvers.

Kolby Logue deftly plays Nikki Crandall, a young showgirl and dancer from Chicago, with the right balance of coy sweetness that later transforms into brazen toughness.

Randall Linkins is charming as Eddie McCuen, a young, haplessly struggling comic quick with corny jokes who soon becomes twitterpated by Nikki. Eventually and believably, Eddie finds a strength within himself he never thought possible.

Jeanne Strunk and Leigh Lunsford portray composer Rogina Hopewell and lyricist Bernice Roth, respectively, the quirky creative team behind the infamous “Manhattan Holiday” and this current musical comedy “White House Merry-Go-Round.” Jeanne ably portrays Rogina, the serious and hard-working composer half of the duo and adept foil to Bernice, her lively, spirituous, and often intoxicated lyricist. Leigh Lunsford infuses Bernice with a fermented delight of comedic physicality and expressions, and showcases her frequent obliviousness to the chaos happening around her when she is seized by inspiration and decides the second act of the play needs a rewrite. Be prepared: Leigh’s stage screams can be heard in the parking lot outside the theater.

Co-directors Scott Chapman and Caitlin Linkins have imbued “The Musical Comedy Murders of 1940” with their special touch and brought to Farmville a delightful and funny evening of theater. “The Musical Comedy Murders of 1940” is Scott’s third stint at directing a Waterworks play after successes with two earlier murder mystery plays by Agatha Christie: “And Then There Were None” in 2017 and “The Mousetrap” in 2019, where Caitlyn worked as assistant director.

I must mention the unsung theater heroes behind the scenes who help make the play successful. As the play begins, Chris Brochon’s disembodied and perfectly modulated voice for 1940s radio effectively establishes the feel and tone of the play and what’s to come.

Randall Linkins deserves praise for his second role as choreographer of the dizzying array of scuffling, stabbings, knock-outs with a vodka bottle, and the dragging and hiding of bodies throughout the library setting. Also doing double duty, as costume designer, is Maryska Connolly. The picture-perfect outfits of the cast successfully capture the 1940s feel– from stylish shoes and authentically seamed stockings to billowy scarves and expensively tailored dresses.

Well-deserved kudos go to Stage Manager Michelle Fenton, to the scenic design team of Scott Chapman and Moffatt Evans, as well as to Props Manager Geraldine Mongold, to Props Artisan Renée Segroves, and to all of the unheralded volunteer builders who not only created a beautiful and wondrous library worthy of a mansion but also made the set come alive with its sliding bookcases and hidden panels to secret passages.

“The Musical Comedy Murders of 1940” was written in 1987 by John Bishop and opened on Broadway in 1987. Catch the Waterworks Players production at 8 p.m. July 22 and 23, 29 and 30, with a 2 p.m. matinee on July 24. The running time is about two hours, with a 15-minute intermission. The 116-seat Waterworks Theater is housed in the large ocean-blue building on County Road 676 off of W 3rd St. For tickets, visit https://waterworksplayers.org/buytickets or call the box office at (434) 392-3452. All actors on stage are fully vaccinated and perform unmasked. Note: Waterworks is required to follow current CDC guidelines as of the week of the show, so audience members must be masked.