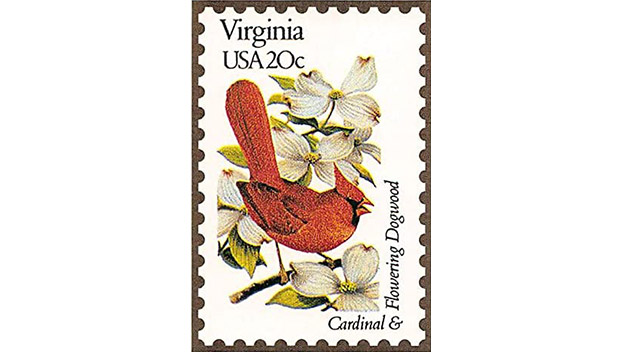 The Cardinal and Dogwood postage stamp.

Did you ever wonder how the state bird designation got started? In the 1980s official state bird stamps were issued. It started in 1978 when a father-and-son team, the Singers, were hired to illustrate 50 bird paintings for manufacturer, Fleetwood. The U.S. Postal Service appreciated the quality and used them to create stamps. The Smithsonian Institute helped compile the official list and it was sent to all 50 governors for approval. Some states have chosen a more unusual species. Delaware’s choice of the Blue Hen refers back to the revolutionary war where fighting roosters was a popular activity.

I’m envious of Georgia, which has the honor of having the Brown Thrasher as its state bird. The Brown Thrasher has a beautiful melody that always puts a smile on my face. Virginia is one of seven states that have declared the Northern Cardinal as its state bird. The cardinal got its name because it reminded early American settlers of the red robes that Catholic cardinals wore. Cardinals love to eat sunflower seeds. They generally like to visit feeders either early in the morning or later in the evening. They are able to withstand Virginia’s hot summers, as well as colder regional winters in other states.

While researching the state birds, I realized that there is also a stamp for state flowers. The Virginia state flower is the American Dogwood. It was adopted in 1918. Thomas Jefferson grew dogwood trees on his Monticello estate in the 1770s. Virginia is the only state to have the same state flower and state tree. The Dogwood tree was named as Virginia’s state tree several decades later after the flower was designated.

The tree is known as Genus Cornus florida. It’s a hard, deciduous tree growing to 15-20’ with deeply ridged bark and leaves up to 5” long, producing white flower clusters. (Actually the white clusters are the bracts that lead pollinators to the real flower, which is yellow and located in the center of the white bract.) It is said that the name of dogwood comes from the colonial description of the fruit as being edible but not fit for a dog. Back then, it was also used as a wash for dogs affected with mange.

So next time you see a cardinal in a dogwood, take a moment to reflect back on the historical significance of that event and know that you are witnessing the state bird, state flower and state tree all in one place.

If you would like to learn more about gardening topics, visit your local Extension office. If you can, please call them, before going, to make sure that staff will be in if you need to bring a sample in or need to talk with an agent or master gardener directly. If you have gardening or landscape questions, you can continue to reach an Extension Master Gardener or Extension staff member by calling your local Extension Office.