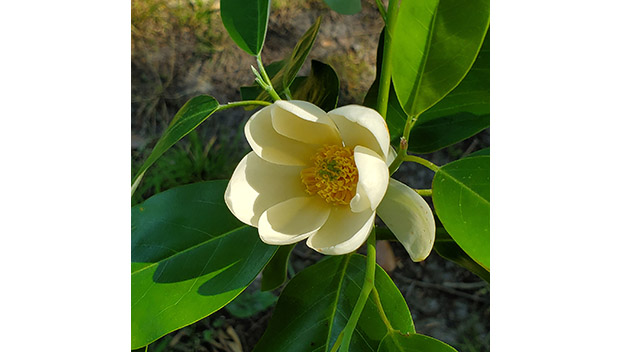 The deciduous sweet bay magnolia is native to our area and perfect for small yards.

It’s magnolia time! The sweetbay magnolias have finished blooming in the wet lowlands along the High Bridge Trail, but the iconic southern magnolias all over our area are still covered with intensely fragrant blooms. And if you go to the Quarry Gardens at Schuyler, you’ll find plenty of  umbrella magnolias there.

Magnolias are ancient plants that developed before bees appeared. Their flowers are structured to attract and encourage pollination by beetles. Unlike most other angiosperms (flowering plants), magnolias have their stamens and pistils arranged in spirals on a conical receptacle. The carpels are thick to avoid damage by beetles. The fruit is a cone-like aggregate of follicles containing seeds with fleshy red to orange coatings. The seeds are dispersed by birds.

The bigleaf magnolia is a deciduous tree native to the southeastern United States and eastern Mexico that is renowned for its leaves, which are the largest simple leaves of any tree indigenous to North America. The leaves can be 24 to 30 inches long. The bigleaf magnolia is rare in Virginia, found only in Lee County.

The cucumber magnolia is a deciduous tree with glaucous-green blooms tinged with yellow that is found in mesic and dry mesic montane forests. The immature cones resemble small cucumbers.

The southern magnolia isn’t native to Virginia but has naturalized in some areas. It’s a large evergreen tree with glossy green leaves and very fragrant blooms. It’s the aristocrat of magnolias.

The sweetbay or swamp magnolia is a small tree/large shrub that is deciduous/evergreen. It has creamy white blooms with a lemony fragrance. The sweetbay magnolia is common in the Coastal Plain and infrequent in the inner Piedmont. There is a disjunct population in Augusta County.

The umbrella magnolia is a deciduous understory tree with an irregular distribution in Virginia. It has large ovate leaves up to 24 inches long and arranged in whorl-like clusters resembling the spokes of an umbrella. The flowers have an unpleasant scent.

Although the southern magnolia is the grand dame of many gardens, it requires lots of space and can be quite untidy. It sheds leaves throughout the year, and they are too tough to be shredded by a lawnmower. The sweetbay magnolia, however, is smaller and tidier while still providing amazing fragrance. It’s perfect.