Learning about the eastern prickly pear 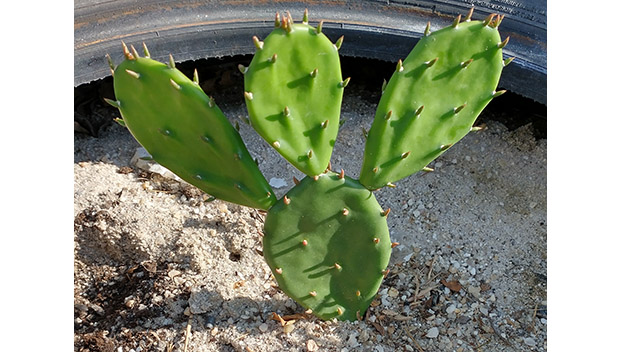 (MARK C. CARROLL) Pictured is the eastern prickly pear that Mark C. Carroll noted “is the only cold, hardy native cactus to our area.”

Like other desert cacti, the eastern prickly pear (Opuntia humifusa) grows in rocky, sandy soils and is very drought tolerant.

Since I do not have a sandy soil composition, I recycled a tire and purchased some sand to create a microclimate similar to what cacti would survive in. Admittedly, I had other plans for this planter, but when they fell through, it provided me an opportunity to try this.

The bottom centerpiece is old growth, it had no roots when I got it. I simply threw it in the sand last year and left it. After the winter, I thought, ‘It doesn’t seem to be doing much,’ so I pulled it out of the sand to discover it had many roots pointing straight down, such that if I set it on a level surface, it would have a table-like appearance.

Realizing that my initial assumption that it was dead was incorrect, I quickly replaced it in the soil. It seems like that was just a couple months ago, and part of me wonders, how did that become such a cool-looking cactus, and so quickly? If you separate one at the node, as I did, and let it callus over, then put it in the soil, you can repeat my results. Obviously they are super-easy to propagate, but aside from caring for native plants capable of surviving cold weather from Canada to Florida, why might someone want to plant these?

I like to eat what I grow, but I am still a bit undecided on whether I will ever eat these. This plant is also called Devil’s Tongue because the spikes or spines are really very small, and if you inadvertently eat them, let’s just say it sounds uncomfortable. I have seen these scraped off before consumption, and reportedly hot water dissolves the spines, so boiling may also be a good way to remove them. Some people’s digestive system may not respond well to them, so, if you try some you might want to sample a little first and see how it goes. They do produce a fruit referred to as pear apples. There are recipes on the internet for prickly pear jelly, syrups and wines.

One great reason to grow prickly pear is for security. Growing them under a window, for example, would likely deter an unexpected and unprepared visitor from climbing in through it; closing and locking the window would also work in most cases. You could make a living fence with them. Before you ask, no, they will not deter deer from your garden, unless, since deer eat them, they get full on prickly pear first.

As I understand it the eastern prickly pear is the only cold, hardy native cactus to our area, so I wonder why I don’t see more of it.