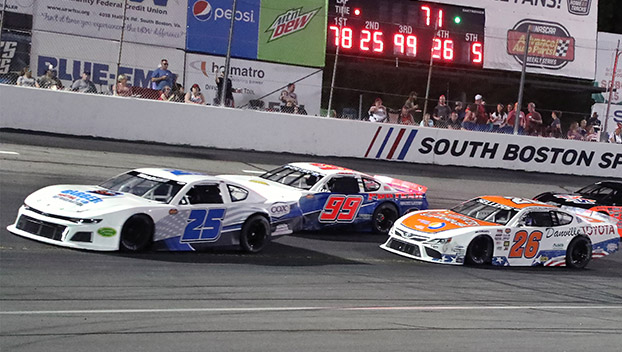 What had been a somewhat comfortable points lead for Layne Riggs has dwindled and the championship chase has suddenly become a close contest among three drivers.

Riggs was involved in an incident in the 200- lap race on Saturday, July 2 and was left with a 23rd place finish. Jacob Borst, who was second in the point standings, finished second in the race. Defending NASCAR Advance Auto Parts Weekly Series national champion and defending SBS champion Peyton Sellers finished third in the race. Borst gained 21 points on Riggs and Sellers gained 20 points on the division points leader in the July 2 event.

While the results of the July 2 event greatly benefitted both Borst and Sellers, it was Sellers that reaped the most benefit. Sellers was in the hunt for the track championship but was somewhat at the edge of the title picture. Now, the two-time NASCAR national champion and six-time SBS champion is squarely in contention for the title along with Borst.

“We kind of reset a little bit,” Sellers remarked.

“I had a bad race the first event of the year and got wrecked off of turn two. That was our mulligan. He (Riggs) used his mulligan July 2. You throw Jacob (Borst) in the mix and he’s doggone good too. It (the championship chase) will be interesting these last few races.”

With four event nights, three of which will be twin-race events, and a total of seven races remain in SBS’s points season, there is plenty of opportunity for a lot to happen before the season ends.

Advance adult general admission tickets for the event are priced at $10 each and may be purchased online on SBS’s website, www.southbostonspeedway.com or by calling the speedway office at (434) 572-4947.