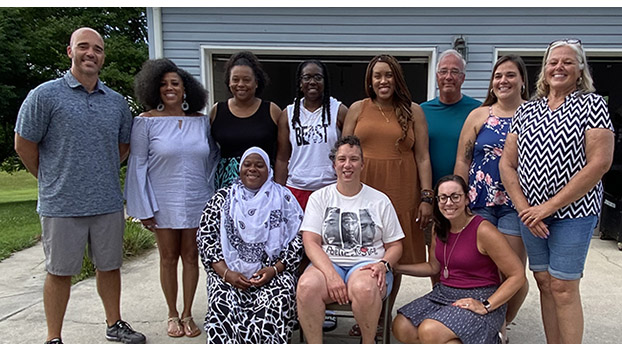 BY THE REV. DR. DEBORAH HICKS-SHEALEY

The team members present were excited to see each other. Time was spent catching up and reminiscing about highlights from the years leading up to the state championship game. Each player and coach shared thoughts and appreciation for Coach Wahrman, their teammates, family and fans.

Some of the highlights from the season included playing rival Brunswick on their court, where their fans were extremely rowdy. Fans threatened the Lady Eagles and even had to be escorted by police safely to the bus.

The team fought through adversity and continued to strive for greatness. In the regional championship game, the Lady Eagles faced Middlessex and from the start people wrote the Lady Eagles off. The fans from Middlessex thought they had the victory in the bag. They even asked the Prince Edward fans to “save the programs” for them so they could remember the victory. The Lady Eagles took the disrespect and ran them out of the gym.

Then came the showdown versus Salem that culminated with the state championship. The community was on fire. Fans came in full force to support our Lady Eagles. Buses loaded with fans took the long ride to Salem to cheer the team to victory. The coaches and players fought a hard battle and brought the championship home to Prince Edward.

Those great years and memories brought the team and community together. It was great to see the bond of the team still strong 20-plus years later. The “family” has continued to grow as each player’s family has grown with spouses and children. The time spent with each other was long overdue but well worth the wait. Some members were missing due to distance and other obligations.

Everyone there was saddened by the passing of guard LaDesha Hughes. A moment of silence was given in her honor. Those attending appreciate her mother, Laura, for her presence.

Team members hope to continue the tradition of honoring this “great team” and its “historic” run every two or three years. Hats off to them.

We look forward to our next reunion and we hope to have more team members and loyal supporters present.

Until next time, we will always have Eagle Pride.

THE REV. DR. DEBORAH HICKS-SHEALEY is the mother of Deshara Shealey who was on the state championship team. She also attended the event.