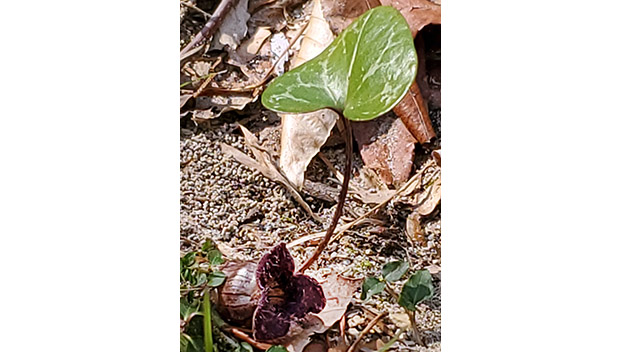 Lewis’s Heartleaf is characterized by one leaf and one bloom.

For years I’ve found heartleaf (Hexastylis spp.) all over Cumberland, Appomattox, Powhatan, and Prince Edward Counties. There are eight species of this low growing, evergreen plant found in Virginia, and they can be difficult to identify unless you’re a seriously good expert. They’re all low growing (around 2 to 6 inches tall), somewhat sprawling, with leaves that are generally heart-shaped with cream-colored markings on top. The blooms are brownish and found at the base of the plant on very short stems; they’re frequently covered by leaf litter. Details, such as the amount of flair on the calyx lobes, the length of the calyx tube, the presence or absence of hairs on the inner surface of the calyx, and whether the leaves are blue-green or bright green, all matter.

Every year I’ve given myself the task of learning to differentiate the various species, and every year I’ve failed. This year, however, I’ve found three species and confirmed their identity with an expert: H virginica, H heterophylla, and H lewisii. I just might be able to identify them again next year. Well, at least one of them, H. lewisii, which is the most distinctive of the three.

This species isn’t common.  It has a very narrow range of about 25 counties in Virginia and North Carolina, and NatureServe estimates that there are fewer than 100 populations extant. One of those is at Holliday Lake State Park. Lewis’s heartleaf is an unassuming plant that half hides in the leaves. It has scattered leaves, one at each node on clonal rhizomes, rather than clumps of leaves. The flowers are also solitary and fairly large. They’re covered with long, soft, white hairs inside the calyx tube and on the three lobes of the calyx. This is the only Hexastylis found in Virginia with these characteristics. It is rare to find blooms. In late March, I found one bloom. Just one, but after seeing that bloom and the solitary leaves, I knew exactly which species of Hexastylis I had found.

This is one of those discoveries that makes me smile and makes all the time spent wandering in the woods worthwhile. A day well spent, indeed. This little brown flower may not be pretty in the classic sense, and the Vascular Plants of North Carolina terms it an “odd species of Hexastylis,” but it definitely deserves careful scrutiny. It has certainly made my spring much brighter.