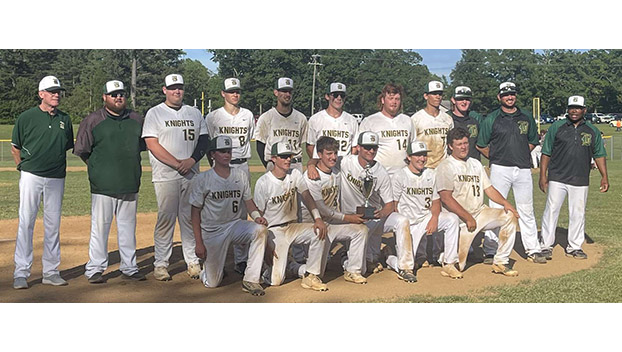 It was a season to remember for the Buckingham Knights baseball team in 2022.

Following a 2-3-1 start that might’ve had some wondering if they would contend come post-season time, the Knights went on to win 14 of their next 15 games. That included the first regional title in program history and a run to the VHSL Class 2 State Baseball Tournament.

After defeating Randolph-Henry 6-1 in the state quarterfinals, Buckingham would see its ride come to an end in a narrow 4-3 loss to Region 2D Champion John Battle at Salem Memorial Ballpark in the semifinals on June 10th.

Nonetheless, there were plenty of memories and moments made that those involved won’t soon forget from the 16-5-1 campaign.

“We stepped it up in the shortened year, won a regional game and had the heart of that team returning.  They were mostly ninth and 10th graders last year. A lot of what went into that slow beginning was intermittent starting and stopping because of the weather, so some games had to get moved around Once we were able to get into that rhythm and played games consistently, we got on a roll,” remarked Trey Lawson, who just completed his sixth year at Buckingham, fourth as head coach of the baseball team.

“This is the same group that went to the Dixie League World Series on two different occasions.  They went to Alabama twice to represent the state of Virginia,” he said. “The majority of these kids were on one or both of those teams.  They’ve been successful pretty much their entire youth careers.”

At the forefront of their attack was sophomore Justin Gunter, one of seven Buckingham players that earned All-District as well as All-Region accolades. Gunter earned Region 2B and James River District Player of the Year honors.

“Our recipe has been that it was a lot of different guys contributed,” noted Lawson, also highlighting Holden Tyson, Cam Newton, Rocco Raynor, Eli Bryant and Camden Allen, their No. 4 hitter who nearly won the game for them in the semifinals against John Battle.  “We had seven guys bat over .400 at the end of the regular season. That’s really what boosted us.”

Gowan left right before regionals to enlist in the Army.

“That’s something that was a dream of his for a long time and I knew it before the season started. He was a good kid, worked hard for us, did a great job and been in boot camp for a few weeks. His grandparents still came to all the playoff games, which was pretty cool that they came,” Lawson said.

He said he was happy that Braedyn Schaeffer got the chance to experience going to the State Tournament.

“That kid has really been instrumental in helping turn this program in the right direction.  He does everything the right way, works hard, does well in school and is a great kid to have in your program,” he said. “ I know he wishes that we would’ve ended up in the final game, but this is still pretty special for him.  I told him this is something you’ll carry for the rest of your life and look back on it proud.”

What made this Buckingham team so unique?  The way they approached the task at hand, Lawson explained.

“The thing about them is they work every day. They’re fun to be around, in a good mood and enjoy being on the baseball field, which makes a difference to kids that have that true passion for the game, listen, and don’t mind coming to practice every day,” he said.

As for the future of Buckingham baseball, it looks mighty bright. The Knights are eager to build off the foundation of success that’s now been laid.

“Going forward, I have a group of seven or eight juniors coming back as seniors. There’s no reason why they can’t make a run again,” Lawson said. “Of course, we’ve always got to keep in mind that just because we were there once doesn’t automatically mean we’ll be there again.  We have to put the work in and do the right things in the off-season, but I think this group will do that.

“At Buckingham, we always have good athletes, some really good football players and even some good baseball players. This is a group of kids that just love playing baseball.”