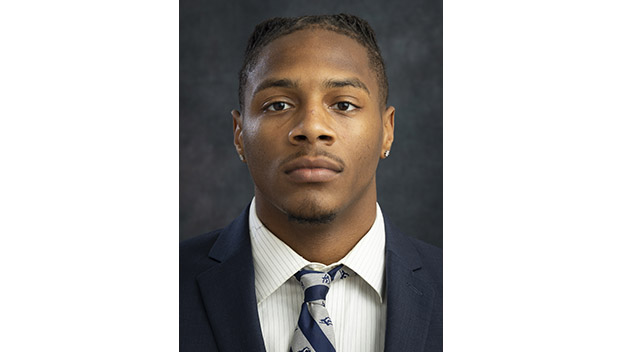 One of the standout basketball players from Longwood University’s historic 2021-22 season has decided to move on in hopes of further elevating his own individual profile, compete on a national scale and possibly one day reach the professional ranks.

Justin Hill, a 6-foot-tall, guard from Houston, Texas, entered the NCAA transfer portal after two seasons with the Lancers and was officially announced as one of seven newcomers to the Georgia Bulldogs May 30.

“I just liked the coaching staff coming in from Florida. I like the way they play, let their guys go and see a lot of player development in my position,” Hill said. “I felt like it was the best place for me to get better.”

Mike White was introduced in March as the new head coach at Georgia after previously coaching at SEC rival, Florida, and leading the Gators to four straight NCAA Tournament appearances before a 19-13 overall finish a season ago.

Coming off a disappointing 6-26 season with only one conference victory, the Bulldogs noticed some special qualities in Hill that should enable him to be a threat when he gets on the floor in Athens.

“I think they were going for the way I push the ball, really get downhill and can be a scorer or find my teammates in those situations,” Hill explained. “I feel like those were the aspects that separated me most from other people.”

When Hill arrived in Farmville after a decorated prep career at Fort Bend Travis High School that saw him earn All-State honors for a team that went 31-7 overall and captured the District 20-6A title in the Lonestar State, his expectations were to quickly become one of the program’s most productive players.

“I thought so,” Hill said when asked if he envisioned making an immediate impact. “Coming from Houston to Virginia, I really didn’t know too much about the conference or the area. I felt if I just played the way I play and kept learning, I’d be fine.”

His second season in a Longwood uniform was much different than the first, simply because of the atmosphere at and around games. During the 2020- 21 campaign, crowds and attendances were limited because of the pandemic. He was glad to see the roar of the crowd restored and fed off the energy of the fans.

“I could say it elevated my game a little because the first year I was there coming in during the COVID year, there was nobody in the stands. We were playing in empty gyms,” Hill acknowledged. “The next year seeing the gyms packed out almost every game, it was a fun experience.”

Hill earned First Team All-Big South accolades a season ago at Longwood while leading the squad to a 26-7 overall record and 15-1 mark in league play. He paced their attack, averaging 14.2 points per game and ranked among the conference leaders in scoring (No. 11) as well as third in free-throw percentage (.797), third in assists (4.2 per game), fifth in assist-to-turnover ratio (1.6) and sixth in steals (1.5 per game).

Best of all, Longwood went to the NCAA Basketball Tournament for the first time in school history, where they were knocked out by another SEC school in Tennessee, 88-56 in the opening round.

“It made me realize that in order to do all that and succeed, that everybody has to be on the exact same page,” Hill noted of last season’s success and reaching the Big Dance. “It really has to be a team thing and you have to account for all the other players and make sure they know what’s going on, too. It was a good experience for me.”

Hill expressed gratitude for the two seasons spent at Longwood that taught him a great deal. What did he learn most while there?

“To really focus in on the little things and the details,” Hill replied. That’s really what separates people. Some people overlook those little things. But focusing on the small details will really get it done.”

Georgia hasn’t enjoyed a trip to the NCAA Basketball Tournament since 2015. Competing at the same level as their football team that hoisted a national title a season ago would be a stretch, but they’re aiming for improvement from the very beginning.

“We’re just trying to rebuild here and have a better season than we did last year,” Hill commented. “That’s all I’m looking to do. Just have a winning season and prove everybody wrong about this squad.”