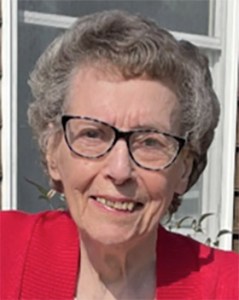 Joanne P. Stanley, 88 of Cumberland, died peacefully on May 25, with loved ones by her side.

Joanne was born April 15, 1934, to George and Margaret Phillips in Morgantown, West Virginia. After graduating from Morgantown High School, Joanne met Wilbur Charles Stanley “Chuck” in 1951 at West Virginia University, where he was a student and she worked at the library. They were wed in 1953 and lived in Fort Devins, Massachusetts, Newport News, Farmville, Cumberland and Charlottesville, raising four children, Robert, Tom, Judi and Pam.

Joanne enjoyed her work in several universities: she served as a librarian and in the Division of Forestry at West Virginia University, as administrative assistant to the President of Longwood University, and as executive assistant and lead medical transcriber for the Dean of the Department of Anesthesiology at the University of Virginia, including transcriptions for academic and medical publications and books. She retired from her academic administrative work in 1999, and moved with Chuck to their farm in Cumberland. In her retirement years, Joanne was very active traveling with Chuck, visiting with her dear friends, volunteering and singing in her church, caring for her home and gardens and corresponding with family and friends near and far.

She is survived by her brother, Warren Phillips; her brother-in-law Bob Ferrell; her children and their spouses: Tom and Janice Stanley, Judi and Tim Gooding and Pam and George Pavlos; her grandchildren and great-grandchildren: Dayna Jae Stanley Southhall; Mandy Stanley King and Andrew King, with Colin and Max; Nicholas Gooding, Ethan Gooding and Che Melendez, with Cairo and Nyla and Paul and Robyn Pavlos, with Oliver, and Chris Pavlos. She also is survived by many cherished nieces, nephews, grand and great-grand nieces and nephews.