Impress guests with homemade burgers this Fourth of July 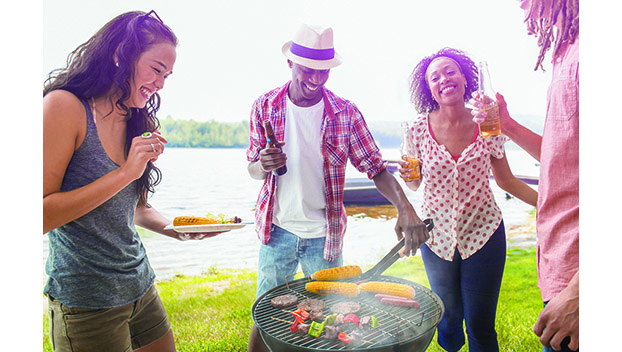 Backyard barbecues are a staple of summertime. In fact, many Fourth of July celebrations just wouldn’t feel right without hamburgers and hot dogs cooking over an open flame in the backyard.

Burgers may not qualify as fancy fare, but they’re perfect for Independence Day celebrations. This year, party hosts can add a little something extra to their barbecues by whipping up some homemade hamburgers. This recipe for “Mushroom and Swiss Burgers with Bacon and Aioli” from “The Essential Kamado Grill Cookbook” (Rockridge Press) by Will Budiaman is sure to make your Fourth of July festivities more flavorful.

Mushroom and Swiss Burgers with Bacon and Aioli

1. Prepare the grill for direct grilling at 500 F, then preheat a 10-inch cast iron skillet on the grate with the lid closed.

2. Put the bacon in the skillet. Close the lid and cook for 1 to 2 minutes or until browned and crispy around the edges. Transfer to a plate.

3. Add the mushrooms to the skillet. Close the lid and cook, stirring once, for 7 to 9 minutes or until browned. Transfer to a plate. Season with salt and pepper.

4. Meanwhile, in a large bowl, season the beef with pepper and 4 teaspoons of salt. Using your hands, mix until just incorporated; form into four 1-inch-thick patties with a slight dimple in the center.

5. Put the burgers on the grate. Close the lid and cook, flipping halfway through, for 8 to 10 minutes total for medium, or until an instant-read thermometer inserted into the center registers 135 F. (If using store-bought ground beef, always cook it to 160 F, or well done.) In the last minute of cooking, top the patties with the cheese to melt and place the rolls cut-side down on the grate to toast.

6. Spread the aioli on the buns and assemble the burgers, dividing the bacon and mushrooms between them. Serve immediately.

1. Put the egg in the bowl of a small food processor. Blend until beaten.

2. With the machine running, slowly stream in the oil through the feed tube until emulsified (the mixture thickens).

3. Blend in the garlic and salt.

4. Transfer to an airtight container, refrigerate, and use within 5 days.

Troubleshooting: Is your aioli just not coming together, staying thin and runny instead of thickening? You may be streaming in your oil too quickly. But don’t throw out the batch. Instead, pour it into a small cup or bowl, wash and dry the bowl and blade of the food processor, and start again with a fresh egg. Use the previous batch as your “oil.”