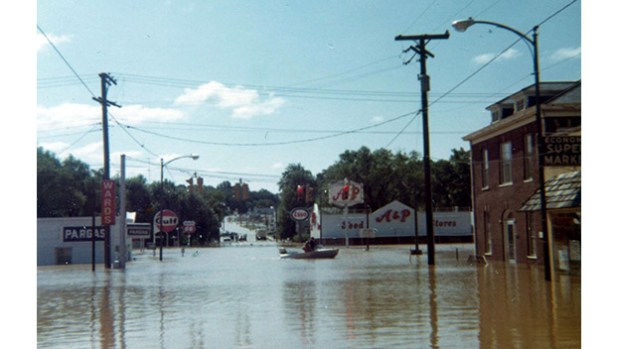 Farmville’s A. & P. Food Store was where J.W.’s Express and A Great Escape Spalon now stand. 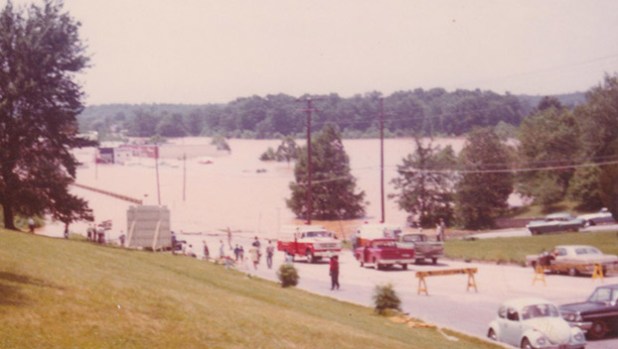 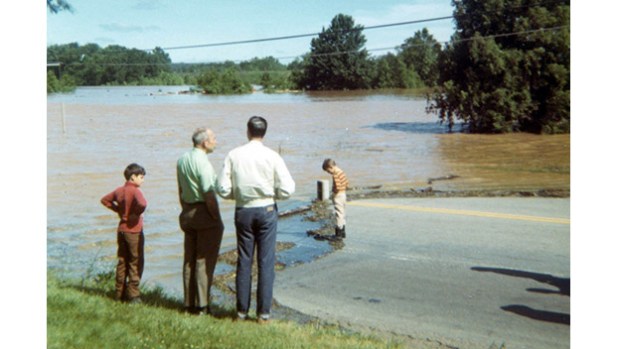 Residents gather at the high water mark on Third to view flooding of the water treatment plant area now home to the Farmville Fire Department. 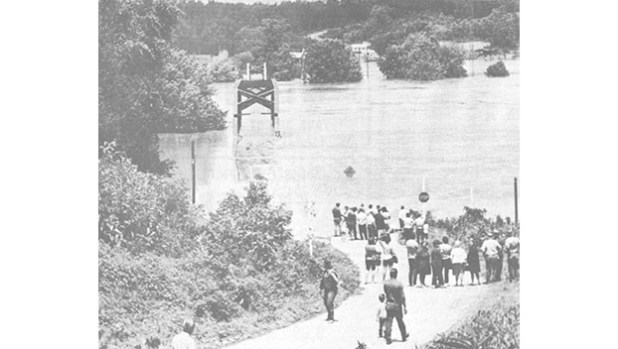 Spectators stand on the bank of the James River at Cartersville and watch in amazement as the devastation of Agnes lashed, demolishing span by span the Cartersville Bridge that connected Cumberland and Goochland Counties. 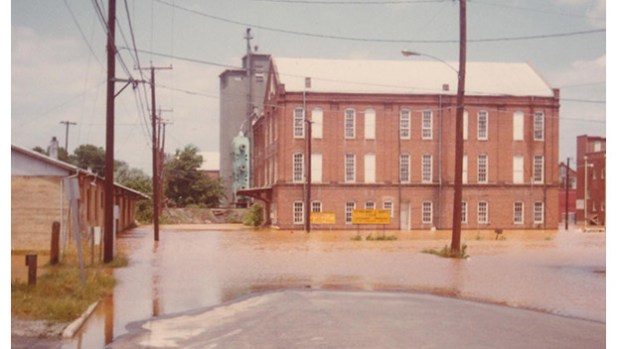 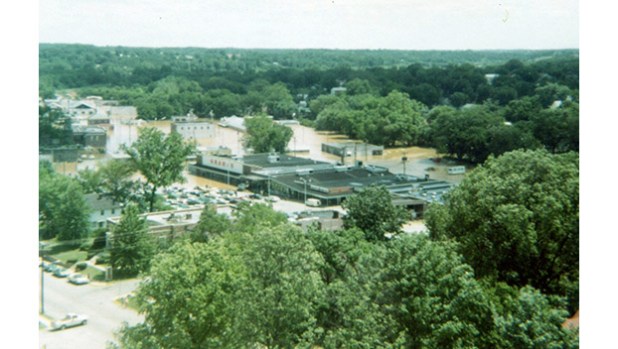 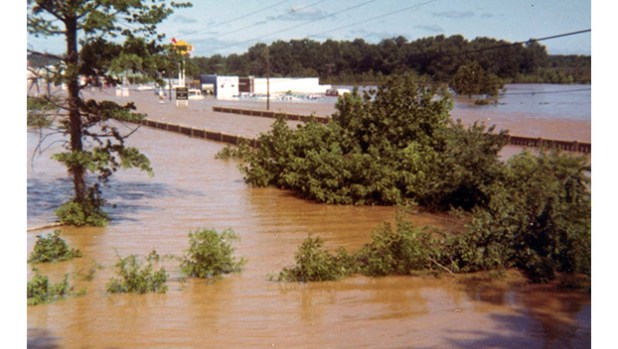 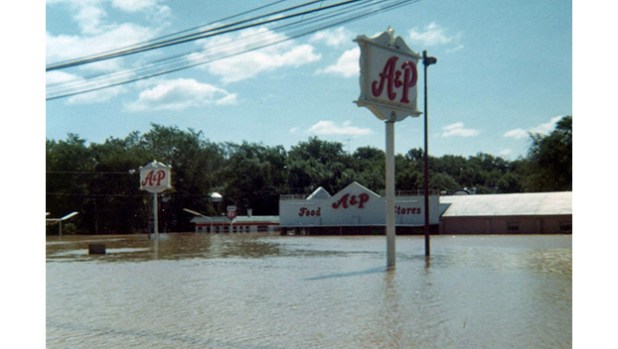 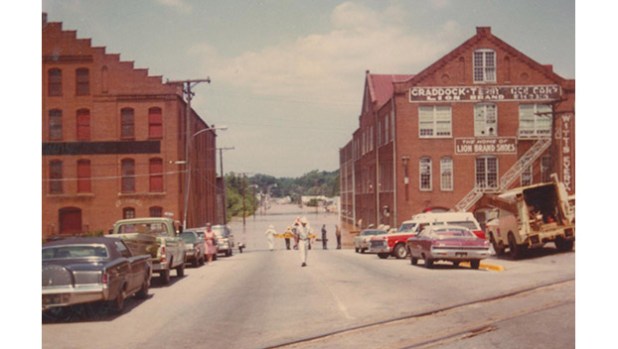 This photo shows the flood water as it encroached between the tobacco warehouse and the shoe factory. Both buildings are now part of the Green Front Furniture complex.

On this day 50 years ago, one of the most devastating and historic hurricanes experienced in the United States caused catastrophic flooding to sweep through the town of Farmville.

Hurricane Agnes began as a tropical disturbance off the coast of Mexico’s Yucatan Peninsula June 14, 1972. As the storm strengthened it traveled north toward Virginia. Agnes became a hurricane by June 19.

On the morning of Wednesday, June 21 continuing through the early morning of Thursday, June 22, a continuous 26-hour rain submerged Farmville’s low-lying plains.

The widespread flooding made Agnes the most destructive hurricane in United States’ history, according to the National Weather Service. The storm claimed about 120 lives and accrued $3.1 billion in damages, mainly in New York, Pennsylvania, Maryland and Virginia. More than 362,000 people were forced to evacuate their homes due to the flooding.

Previous floods dating back to 1921 and 1971 only reached heights of 21 feet, while the flood of 1972 due to Agnes reached as high as 29.7 feet. This hurricane sits at the number one spot of the historical crests for the Appomattox River in Farmville.

Hurricane Agnes left her mark on the town.

Water trickled over the U.S. 45 bringing major highway traffic to a halt. There was a three-quarter mile stretch of water from the Appomattox River Bridge at Southside Community Hospital to the Kit Carson Motor Court merging the Appomattox and Buffalo rivers, creating one stretch of water. Water was still rising slowly by midday Thursday.

Schools closed. Fire and rescue services were slowed. There were also major disruptions in the agricultural industry from the destruction of crops and livestock. The Prince Edward County Disaster Committee estimated farm and crop damage to be at least $210,000.

The town lacked resources and personnel due to communication and transportation restrictions.

Businesses were submerged in water, creating thousands of dollars in damage and loss of product, and factories closed. Families were isolated and separated. Utility services and the Farmville water filtration plant were shut down, and there were power outages and phone interruptions all over town.

Jimmy Hurt, president of the Farmville-Prince Edward Historical Society, experienced the flood first hand. On the day of the storm, Hurt and a few other employees were trapped in his family grocery store overnight.

Hurt worked the morning shift the day of the storm and was called back to the store to help gather things from the lower shelves and relocate them to spare them from the water, he said. Later the National Guard came and ordered everyone out, but he recalled that he and a few others sneaked back into the store.

Hurt said he was in denial and didn’t believe anything like this could happen.

As the storm was brewing, the group continued to move things around and remained in the store. The water began to seep inside before they knew it.

“The water was up to about my knees around 11 or 12 o’clock at night and I knew it was going to be bad then,” Hurt said.

Hurt and others slept in the store overnight on top of the checkout counters. When they woke up the water level had risen above their waists. Perishables were ruined and there was food floating throughout the store.

“You talk about a weird feeling looking around your store you worked in all your life and all of a sudden the water is up above your waist,” Hurt said.

The store prepared for about 18 inches of water, but it ended up being about 5 feet, Poulston said. Much of the store’s merchandise was moved to a warehouse, which sat on higher ground, before the flood. The merchandise left behind was determined for workability and safety after the flood. Items were either placed back on the store’s shelves or discarded.

“God’s been good to us,” Poulston said. “He’s kept all these streams and things within their balance. Those storms that came through like that not only caused destruction of property, but people lost their lives in them.”

Much of the town’s store repairs were completed with the help of the community. Many volunteers who helped with cleanup were people who lived here and were just being “good neighbors,” Poulston said.

Dump trucks were placed around town for people to use as they began their cleanup. One was placed outside of Hurt’s family store free of charge for 24 hours a day until their cleanup was complete, he said.

“People came from everywhere,” Hurt said. “With shovels and rakes and hoes, they came to our grocery store. Lots of people I didn’t even know.”

Hurt and others shoveled the debris out from the store, electricians came to work on refrigeration and fire trucks washed the buildings, Hurt said. After about five days, the health department came to determine if the store was eligible to open after the town water was back on.

“I was really touched by how everybody just pitched in, and it was like this flood is not gonna get the best of this town,” Hurt said. “We’re gonna fight back and I don’t know why I was shocked by that, but I was amazed at how the town was resilient.”

The government also offered assistance through loans with lower interest rates and other aid.

Some businesses and roads were still closed about two months after the flood, Hurt said. There were several instances he recalls where bridges were washed away and it took months to replace them.

An estimated cost of $2.6 million was set for the restoration of secondary and primary roads in Prince Edward, Cumberland and Buckingham counties, according to a spokesperson for the Virginia Department of Highways quoted in The Farmville Herald at the time.

With climate change on the minds of many officials, the risk of flooding concerns are on the increase. It is important to take all necessary precautions to avoid catastrophic damage and loss, experts advise.

One inch of floodwater can cause up to $25,000 in damage, according to the Federal Emergency Management Agency. The National Flood Insurance Program, NFIP, provides flooding insurance through more than 50 insurance companies for property owners, renters and businesses.

“Always be alert to what weather forecasts are or what’s the condition, and of course if you don’t have flood insurance, then buy it,” Poulston said.