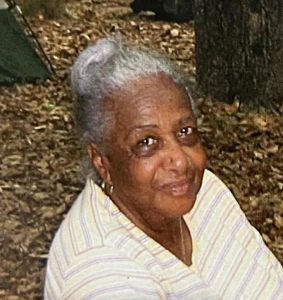 Bertha Elizabeth Shepperson (nee Earley), 88, passed on to her eternal reward on June 1. Bertha was born on March 2, 1934 in Prince Edward County, the daughter of Emerson Earley and Susie Earley (nee Lyle) and the first of nine children.

Bertha grew up and lived most of her life in Prince Edward County and graduated from Robert Russa Moton High School in Farmville in 1952. She lived and worked in New York for many years following high school. Bertha returned to live in Virginia in 1970 and thereafter began working for the Virginia Department of Corrections, from which she retired after more than 30 years of service.

Following her retirement, she and her two sisters, Deloris and Carolyn, catered local events and she also worked part time at a group home for the mentally disabled.

Bertha also volunteered extensively in the community after retirement. She served as a Foster Mother and for years she volunteered as a delivery driver for Meals on Wheels and a Greeter at Centra Southside Community Hospital. She was involved in various other community boards and civic activities.

While a high school student, in 1951, Bertha participated with her classmates in a walkout and strike at segregated Robert R. Moton High School in Farmville to protest the substandard resources and conditions there. Following the strike she joined as a named plaintiff in the federal lawsuit, Davis v. Prince Edward County, seeking the end of segregated schools. That case was later consolidated with others resulting in the landmark 1954 Supreme Court decision in Brown v. Board of Education, which was a seminal moment at the outset of the civil rights movement in America. Exemplifying Bertha’s humility, she always credited others for the actions taken in 1951. However, she was interviewed in 2004 about the school walkout and related events and was featured in front-page articles in the Boston Globe and Wall Street Journal. That year she and her classmates were invited to a 50-year commemoration of the Brown decision at the White House, where she enjoyed meeting President and First Lady Bush.

Bertha was a lifelong member of New Bethel Baptist Church. She was also a kind and generous soul, always present for others. She was well loved by immediate family, extended family and friends alike, many of whom knew her as “Aunt Bertha.” She enjoyed spending time with all of them. Many in younger generations looked up to her and describe her as a “Legend” or the G.O.A.T. Bertha was especially proud of her only daughter L’Tonya; her son-in-law, Tim, and her grandchildren, Joshua and Rebecca who know her as “Nana.”