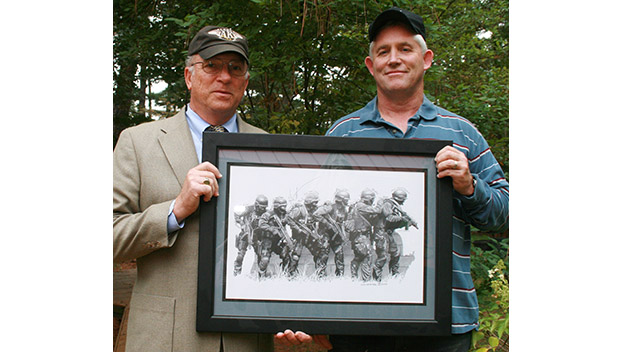 Mickey Smith, Billy Simmons, Chris Harvell, and I met at the Wingina boat landing on the James River, west of Buckingham Court House about 8:30 AM on Friday, May 20. A bridge on Hwy 56 crosses the river. We ranged in age from 79 to 50. Everyone knew the trip we had in mind was not for the feint hearted but in spite of the temperatures expected to be in the mid 90’s we piled into Mickey’s vehicle and headed to Bent’s Creek on Hwy 60 with a 1982 Grumman 17.5 ft. aluminum canoe and two Field and Stream kayaks. The distance between the two points is only about six miles when measuring both ways as the crow flies from the large curve in the river but probably more than twice that when counting all of the “S” turns in the river.

Mickey at the last minute had volunteered to ride in the front of the canoe when the original voyager backed out. This had to be the blessing of the day. Mickey is strong as an ox and retired from the Chesterfield Police Department (SWAT being one of his assignments). Billy is also a retired Chesterfield police officer and Chris, still somewhat young and employed just loves the outdoors. I share in that fascination and many times reminisce about my adventures chasing escapees from Beaumont Juvenile Correctional Center on the James River where I was assigned as an administrator twice.

When we got to the Bent’s Creek landing Mickey asked, “Where’s my seat.” I had told him I would bring him a cushioned seat but upon packing all of the necessities (as I saw them) didn’t have room for the seat. They included a life jacket (for me; Mickey had one), first aid kit, bail out bucket, ropes, snacks, water, toilet paper, and of course a revolver since any one previously in criminal justice has to have one. My stuff was packed in a basically heavy duty plastic footlocker that wouldn’t fit any way but cross ways in the canoe. Mickey and I both had our most valuable items in water tight containers.

Getting launched was easy enough. Chris started casting his line as soon as he got on the water and Billy looked like a true racer wheeling his double tongued paddle. Mickey also began casting right away and I wondered where he was going to keep all of those fish he caught…maybe he expected to keep them in a canoe filed with water (as proved to be the case).

Canadian geese were swimming on the water, we were sighting Bald Headed Eagles that had no fear as we cruised closely by them, and at places the pastoral scenes were stupendous as we saw Black Angus cattle entering the water to cool off. We were a little hot but this would change in short order.

A few cascading ripples appeared but we had no apprehensions because the river was supposed to be high and those nasty rocks were well below water. Then it happened. We hit an underwater boulder…the “Titanic” and extremely tough aluminum canoe had taken a direct hit. We floundered and paddled like hell and couldn’t break loose. I had told Mickey not to eat much breakfast.

Then the canoe went perpendicular to the river flow and tilted so we both hit the water. My paddle disappeared but I saw it jammed by water pressure in the rocks below. Mickey was blocking the canoe from getting away by applying his full body weight against it. It filled three fourths full of water and then my precious footlocker broke loose from the canoe. The small rope held it though and Mickey nonchalantly walked over to the footlocker, opened it just above the water line, and handed me the bail out bucket.

Needless to say I became a master bailer in a matter of just minutes. After we got the water down in the canoe and reinserted the footlocker, we were able to find tall enough under water rocks to get into the canoe, break it loose, and head it basically straight down stream.

Problem in canoe travel solved, right? Find the fewest cascades, keep the canoe straight, and yell at Mickey for not spotting a rock when we glance off one. If all else fails and you get hung up, stick your hand under water and lift the canoe off of the rock.

It was all fitting together. Kayaks were riding in the lead and behind us to keep us under observation became they were the true negotiators of rapids. Mickey then had an intuition just like a good cop should…he asked, “Where’s Billy?” He craned his neck because I couldn’t and saw Billy and his kayak separated from each other…at least Billy wasn’t sitting in it.

We somehow reversed the canoe and got to a madder than a wet hen Billy. He said “There was no warning…suddenly I was in the water.” Maybe he descended into one of the whirlpools we were luckily avoiding. The water hydraulics had blown the plug out of the top of the Kayak and it never was seen again.

Chris showed up in his kayak and we got Billy and vessel (basically upside down but still floating) over to a live tree truck a little above the water line. Mickey directed the operation and he and Chris upended the kayak and drained the water out of the missing plug in one end. The kayak had our canoe and the tree trunk for a rest.

Chris and Mickey assisted the slightly damaged and disheveled Billy in getting back in the canoe. His legs got banged up but no need for the first aid kit, he said. He was immensely proud of not losing his baseball cap.

So there we were merrily paddling down the stream. Row, row your boat and the destination can’t be long off. It was getting to be past 3 PM and we wondered if we had found another river. Chris couldn’t check his cell phone GPS because the small mountains blocked reception.

Finally there it was…the bridge at Wingina. Women were carrying inner tubes down to the water’s edge and children were having a good time.

Billy said “And this is what Virginia Beach looks like. I’m sure we came far enough to be at the beach.”

No one caught any fish although Chris gave a Terrapin a ride on the front of his kayak. Since the Terrapin had no sun screen Chris put him back on the bank after a while.

Mickey hopped in my small pickup truck and drove back with me to pick up his vehicle and the trailer at Bent’s Creek. The landing was swarming with people. I was tempted to say, “You know it’s really fun to get in the river and just float downstream.”

My mind at that point was to get back to the nearby Goodloe Hunt Club, take a shower, and crash in my bunk. Mickey had two people to keep him awake on the way back to Chesterfield. He made it because when I went by his house on Sunday I saw that battle tested canoe on his trailer. When I got it home I checked the numerous scars to the bottom that were only superficial…the canoe is definitely ready for another trip, just like the four of us who had so much “fun.”

Jim grew up in Buckingham and Prince Edward Counties. His mother, Nell, grew up near the Willis Mountain and waited for Jim, his son – Jeb, and another teenager at Wingina when they canoed from Bent’s Creek in the same canoe in 1990. Then the water was so low that the group had to push the canoe through the rocks. Jeb is a true outdoorsman who lives in a timber frame house he built for his family in Vermont.