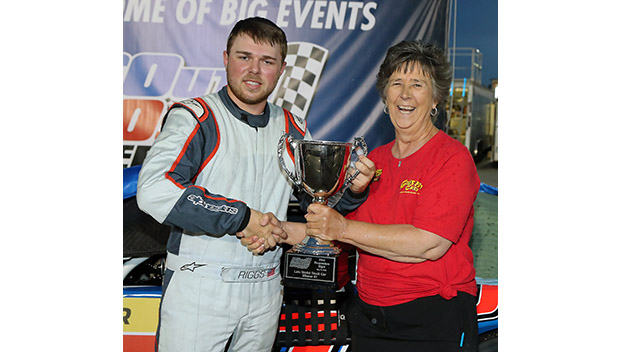 The sweep gave Riggs three wins in his last four starts at the .4-mile oval and gave him seven victories in his nine starts at South Boston Speedway.

“It’s tough to sweep twin races here at South Boston Speedway,” Riggs acknowledged. “We’ve got some of the best competition in the country right here. It’s a testament to my guys giving me great racecars every race. It’s a hard task to do, and I’m super proud of it.”

Riggs started sixth in the opening 75-lap race but muscled his way past Bruce Anderson of South Boston, Virginia on the 13th lap to take the lead. Once in front, Riggs never gave up the lead and drove to a 1.013-second win over runner-up Mark Wertz of Chesapeake, Virginia.

Starting 10th on the grid for the inverted start of the second race, Riggs quickly sliced his way through traffic and grabbed the lead from Anderson on the ninth lap. A late-race caution set up a short four-lap battle to the finish between Riggs and Sellers, with Riggs taking the win by .787-second.

There were two lead changes among three drivers in the second race, with Riggs leading the last 67 laps.

Kyle Barnes of Draper, Virginia has held the hot hand in South Boston Speedway’s Budweiser Limited Sportsman Division, winning two of the first three races of the season and finishing second in the race he didn’t win.

Barnes added another win to his total, scoring his third win of the season in the first of the night’s pair of 30-lap races.

The victory was a tough one for Barnes. Barnes started seventh and had to battle his way to the front of the field. He took the lead from Brian Thomas of Henderson, North Carolina with seven laps to go and edged South Boston Speedway rookie Carter Russo of Rougemont, North Carolina by.403-second to earn the win.

The race featured two lead changes among three drivers with Crews leading three laps and Thomas leading 20 circuits before Barnes took the lead near the end of the race.

Crews’ victory in the second 30-lap race was something of a milestone. The victory was Crews’ first win since 2013. And, for Crews, who drives car No. 75, the same number that his dad, Bruce Crews, carried on his car when he won the South Boston Speedway Street Stock Division title in 1995, it was the first victory for the number 75 car at South Boston Speedway in 22 years.

“It’s a blessing and we worked really hard for it,” Crews remarked. “I’m going to remember this for a long time.”

Crews started fourth and spent much of the race battling Barnes. The pair were battling hard for the lead when Barnes spun with two laps to go in the 30-lap race. That put Russo and Jason Myers of Hurt, Virginia into contention for the win with a restart with two laps to go. Crews forged ahead on the restart and held on to edge Myers by .121-second.

There were three lead changes among three drivers with Crews leading twice for a total of 21 laps.

It’s beginning to look like Nathan Crews of Long Island, Virginia is back to his winning ways at South Boston Speedway.

Crews, the defending division champion, made his first start of the season in the division on April 29 and earned the win in the 25-lap race that night. Saturday night he swept the twin 15-lap Southside Disposal Pure Stock Division races to run his 2022 win streak to three in a row.

He started third in the first 15-lap race, squeezed past Johnny Layne of Halifax, Virginia on the final lap and edged Layne by .221-second at the finish line.

The race was very competitive, with two lead changes among three drivers. Layne led 13 laps of the 15-lap race.

Crews started sixth in the second race but needed little time to get to the top spot. He took the lead from Layne on the third lap and sped to a dominating 5.638-second win over Phillips.

The event has registration and pit gates opening at 2 p.m. Practice starts at 3:30 p.m., grandstand gates will open at 5:30 p.m., qualifying begins at 6 p.m. and the first race of the night will get the green flag at 7 p.m.