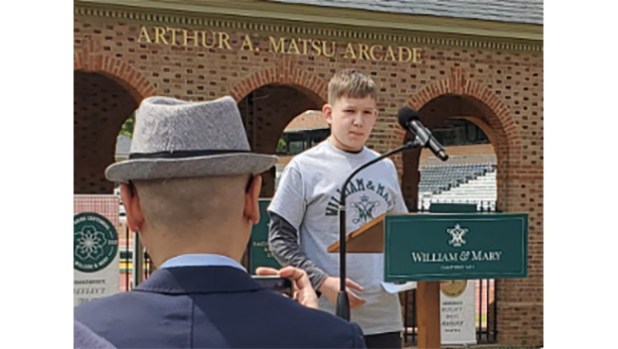 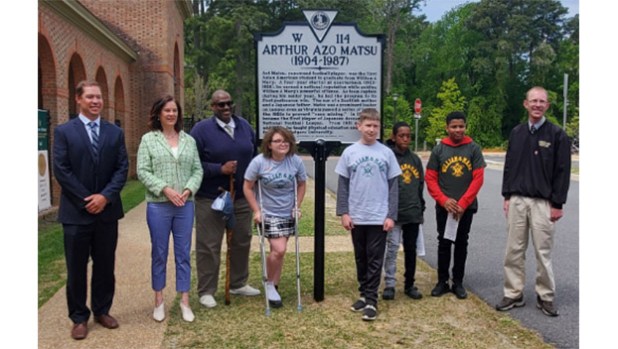 On Saturday, April 30, the Arthur Matsu Roadside Historic Marker was dedicated, along with the Arthur Matsu Arcade, a section of their football stadium at the College of William and Mary. The marker was a result of a winning entry from Cumberland Middle School students for the 2021 AAPI VA Historic Marker Contest. The students who worked on the Art Matsu submission for the contest were Andrew Crenshaw, Abdullah Fulani, Hailey Frank, Jack Parker and Iziah Brown.

During the dedication ceremony Cumberland Middle School sixth grader Jack Parker delivered a speech detailing how the winning marker submission was completed. In his speech Jack said “We discussed who was most deserving of a historic marker and as a group we selected Arthur Matsu, the first Japanese American NFL Quarterback, for our submission. We used reliable sources and typed out a summary stating that the marker should be placed near the football field on the campus of William and Mary and listed some of his many accomplishments. We noted he was the First Asian American Student Athlete at the College of William and Mary, after playing in the NFL he taught and coached at several High Schools in Virginia and then joined the Rutgers University Faculty and Football Coaching Staff.”

The teacher who helped the students with this project Lewis “Lew” Longenecker also spoke during the presentation. He said “Through participation in the Black History Month and AAPI Heritage Month Historic Roadside Marker Competitions, my students have been exposed to the importance of teamwork. They gain a realization that there are common values such as the importance of education, unselfishness, service to others and a love of democracy that people of all backgrounds share. Jack Parker, Abdullah Fulani, Andrew Crenshaw, Iziah Brown and Hailey Frank, due to your hard work, 10 months ago during summer school there is now a Historic Marker for Art Matsu.”