Fireworks in the woods 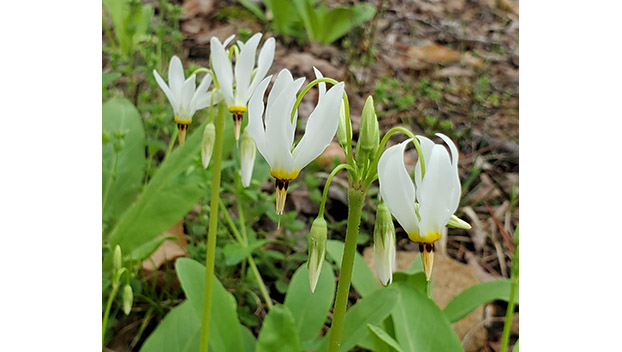 The eastern shooting star is rare in the Piedmont, but lovely.

One of my favorite spring ephemerals, the eastern shooting star (Primula meadia), has a variety of common names – pride of Ohio, prairie pointers and rooster heads! I’m not sure how it got that last name; it’s definitely distinctive.

The eastern shooting star isn’t common here in the Piedmont and is rare in the mountains. One of the most reliable places to see it is at the Quarry Gardens at Schuyler where it grows in the woods near the parking area. It appears early, charms everyone, and then, like other ephemerals, goes dormant until the next spring.

The eastern shooting star is a native member of the Primrose Family that is found in rocky woodlands and barrens where there are calcareous and mafic rocks. It has a low basal rosette of leaves from which long reddish or green stems emerge. They are topped by umbels of blooms that are said to resemble shooting stars, hence one of the common names. Each flower has a curved pedicel and a corolla deeply cut into five lobes that resemble petals. The flowers can be white, pink, or pale lilac in color. They are not fragrant and don’t contain nectar. Pollinated flowers are followed by a cylindrical, mahogany-colored seed capsule containing very tiny seeds that are spread by the wind.

The pollen of eastern shooting stars is difficult for most insects to dislodge. Queen bumblebees are the most frequent visitors to these plants, and they solve the problem by vibrating their flight muscles in such a way that the pollen lands all over the insects. The queen bumblebees then collect the pollen from their fur and transfer it to the pollen sacs or bags (corbicula) on their hind legs. This technique is known as buzz pollination.

In England, the eastern shooting star is a popular shade garden plant and in 1993 received the Royal Horticulture Society’s Award of Garden Merit.