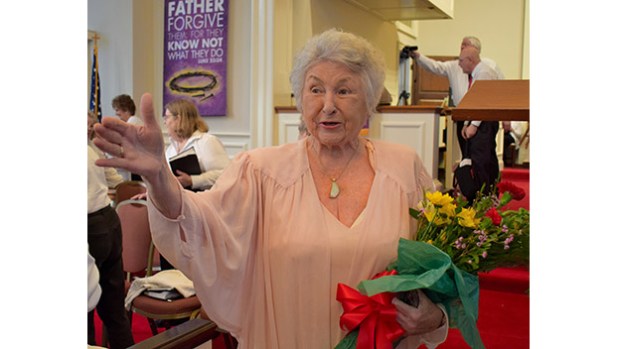 Norma Williams waves to the audience following one of her final performances as artistic director for the Commonwealth Chorale. 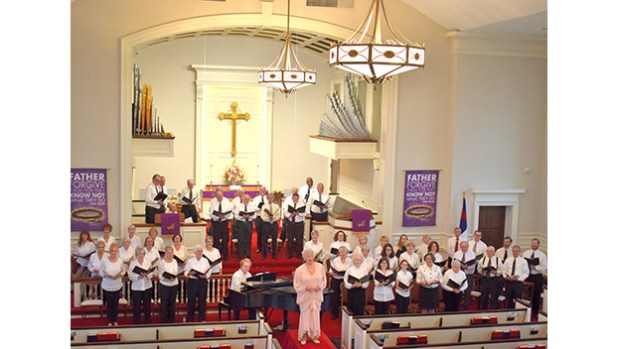 Artistic Director Norma Williams conducts the Commonwealth Chorale at one of many performances that were held at Farmville United Methodist Church and other venues across Southside Virginia.

The Commonwealth Chorale of Virginia will hold a reception in honor of its founder and longtime artistic director Norma Williams on Sunday, April 24, 3-5 p.m., at the Historic Farmville Train Station.

Before coming to Farmville in the 1970s to teach voice at Longwood College,

Williams led an illustrious career as leading soprano in opera houses across Europe and managed the Lincoln Opera in Chicago.

In 1975 Williams founded the Commonwealth Chorale based in Farmville, a community choral group with a mission to present great choral repertoire. As artistic director Williams directed Chorale performances across Southside Virginia for more than four decades.

Williams grew up in Australia in a musical family.

“Everybody could sing or play the piano,” she recalled. “On Saturday night we would go through a whole Schubert work or something.”

Williams was 9 years old when she made her singing debut on the radio in Melbourne, Australia.

“My dad was a minister, and consequently we moved around a lot,” she said. “Then we came back to the states, and I got my bachelor’s degree at Millikin University in Decatur, Illinois.”

Williams went on to earn a Master of Music Performance at Chicago Musical College.

“Then I got a Fulbright scholarship and went to Stuttgart, Germany,” Williams continued.

In the 1970s Williams came to Farmville.

“I came here about the time Longwood went coed,” she related.

Williams stayed four years before returning to Chicago to chair the vocal department at DePaul University. During that time she established the Lincoln Opera Company and served as its general manager for 18 years.

“The Lincoln Opera was solely regional,” she noted. “We had our own orchestra, ballet, lighting director and costume designer. Over 120 people were involved — it was very successful and quite wonderful.”

In the 1990s Williams decided to come back to Farmville.

“Chicago is wonderful, but it’s not a place to grow old,” she explained.

Williams, who will turn 91 in May, continues to find opportunities for growth in and around Farmville. She’s currently enrolled in a class at Hampden-Sydney College that meets three times a week.

“I’m taking the class in ‘History of Western Art from Renaissance to Modern Times,’” she explained. “It’s a challenge but also very interesting to me. When I was touring Europe giving concerts I always took a day to visit the art museums.”

Music, of course, is still a major focus of every day.

“I listen to music most nights for about three hours,” Williams stated. “Music is my life — I have to do it.”

Williams continues to support the Chorale by serving on the board and attending every concert now under the direction of a new artistic director.

Williams is justifiably pleased with the community chorale.

“I’m terribly proud of what we did over the years,” she said. “The majority of our singers had no musical training — you’d have farmers singing alongside college professors.”

She still recalls a comment in a letter to the editor written by a local doctor after attending his first Chorale performance. Regarding the singers, he wrote: “I know they’re not singers — I know that — and yet they do it!”

Williams credits Chorale members for their amazing sound, one she has helped them achieve.

“During my career I learned what it takes to reach the top,” she concluded. “I think the Commonwealth Chorale has taken a place in the world of classical music at the very top. The biggest thing I’ve done, and what I’m most proud of, is that I’ve passed on what I learned to help them reach that level.

The community is cordially invited to attend the reception honoring Norma Williams at the Farmville Train Station on April 24, 3-5 p.m.