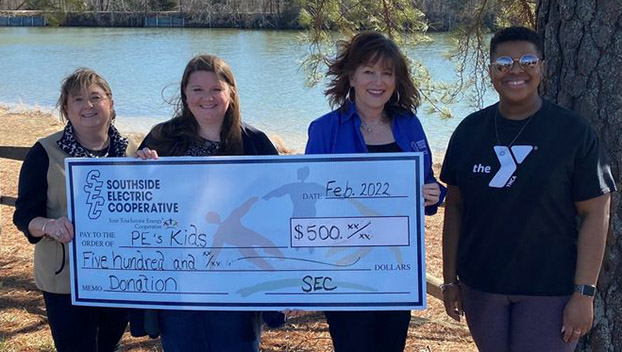 Tiffany Gee will tell you people think well of Prince Edward’s Kids (PE’s Kids) “People ask me all the time about PE’s kids,” said Gee, the group’s chairperson. “We’re still being thought of.”

Thought of, but just not as noticed as the group would like.

Formed several years ago, PE’s Kids is a nonprofit helping children in prekindergarten through 12th grade by paying for soccer cleats, camp fees, music lessons, field trips, prom tickets, clothes and other items. Board members do not meet or know the identity of the children but are notified of the need by school officials – counselors and teachers – serving as spotters.

The group has spent the last few years trying to expand its name recognition as it establishes itself in the community.

In presenting the check, SEC noted it “loves helping the group continue to support our youth.”

The organization still concentrates on helping Prince Edward’s children, but is slowly expanding its outreach.

Thanks to tremendous fundraising the first part of last year, PE’s Kids is positioned to be very helpful to local school children this academic year, board members have said.

Longtime educator and retired Hampden-Sydney professor George Bagby based the organization on northern Virginia-based Alice’s Kids. Donations are encouraged and appreciated, and those interested in making them can send contributions to PE’s Kids, P.O. Box 524, Farmville, VA, 23901.

The group has Facebook and webpages, and board members have been making the rounds to community groups, all helping get the word out about PE’s Kids efforts.

PE’s Kids will not pay for items such as food, medical care or group supplies. Children raising money for something  –  such as a band trip  –  can get a donation, but only after raising a portion of the money first, the guidelines note. Parents of the child either receive a check written to the appropriate entity or a gift card that is sent to the school official from PE’s Kids. That way, the parent will have the pleasure of taking the child to the store and shopping for the item.