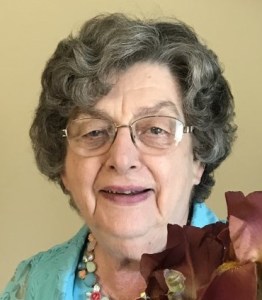 Mary DeLaine Allcock, 82 of Farmville, passed away Friday, April 8, at The Woodland Rehabilitation Facility. She was born in Independence, Kansas, on May 29, 1939, to the late Rev Byron T. Sherbenou and Irene Parret Sherbenou. She was preceded in death by her beloved husband, James, in Feb. of this year.

Mary DeLaine graduated from Union University in Jackson, Tennessee with a Bachelor of Music degree. While at Union, she met a very persistent farm boy, named James, who she said, “eventually won her over.” They married and served the Lord together for 61 years. She completed her graduate work at Southern Baptist Theological Seminary and they moved to their first church in Bowling Green, Kentucky.

A year later they moved to Baltimore, Maryland, where James became the first full-time State Music Secretary for the Southern Baptist Convention of Maryland and Delaware. They joined Temple Baptist Church, where they were active members of the choir and supported the local ministry in numerous ways. Mary DeLaine found her special calling with children’s choirs. She freely shared her musical and artistic skills and was continually creating new activities for the children. After years of volunteer ministry as the children’s choir director, she was called as Minister of Music at Temple Baptist Church. Her work at the local, associational and state level also led to twenty years of writing curriculum for the Baptist Sunday School Board on the periodicals for Music Makers and The Children’s Choir.

In 1990, the book How to Lead Children’s Choirs, which she co-authored with Madeline Bridges, was published. It is still available today in demand print. In addition to her work as a children’s choir specialist, she played the piano and flute and had a beautiful soprano voice.

After leaving Maryland, she and James were an unstoppable team at First Baptist Church in Hope, Arkansas, First Baptist Church in Clarksville, Arkansas and Heritage Baptist Church in Farmville. She sang both in the Women’s Chorus of the Arkansas Master’ Singers and the Virginia Baptist Women’s Chorale. They remained active members of Heritage Baptist Church after James’ retirement. She was especially fond of working with the one-four year olds at the Heritage weekday program. She was always willing to lend a hand and in addition to working with the children’s choirs, singing in the adult choir and leading the Women on Missions. She maintained her creative bulletin boards until James’ illness curtailed their mobility. Her intense devotion and tender care for him never wavered. The heavenly choir gained a power couple of music ministry this year.

She is survived by her two daughters, Melody Will (John Jr.) of Virginia Beach and Jana Liebermann (Rick) of Lynchburg; two grandchildren, John Will III of Blacksburg and Morgan Will of Charleston, South Carolina and sister, Jan Surratt (Larry) of Hollywood, Florida.

We will celebrate the lives of Mary DeLaine and James at 11 a.m., on Saturday, June 18, at Heritage Baptist Church, 700 Milnwood Rd., Farmville. In lieu of flowers, please send donations to Skycroft Conference Center. In addition to James’ work helping to establish Skycroft, Mary DeLaine’s father was the first Assistant Manager. A memorial gift will be erected in their honor; Skycroft Conference Center, 9621 Frostown Road Middletown, MD 21769. In the memo designate: Memorial gift for James and Mary Allcock 800- 536-6759 skycroft.org