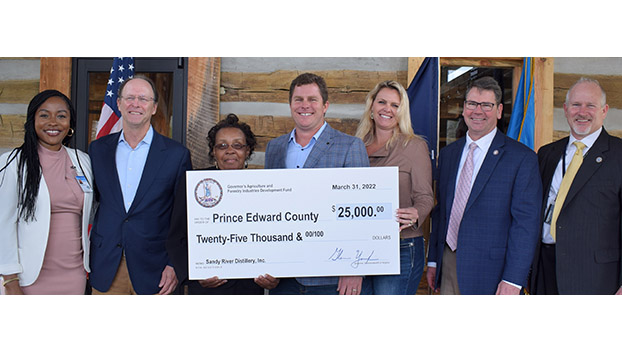 Secretary of Agriculture and Forestry for the Commonwealth of Virginia the Honorable Matthew J. Lohr visited Prince Edward County on Thursday, March 31, for an announcement event adding Sandy River Distillery to the list of the commonwealth’s wineries, breweries and distilleries.

Launched in June 2012 by owners Mark and Candice Smith, the facility features four log cabins, one cottage, six tipis, a workshop, several pastures, a pond and an adventure park, a press release noted.

In his remarks, Lohr stressed the importance of agriculture in the state’s economy.

“Virginia agriculture is a $70 billion industry,” Lohr said. “This distillery at Sandy River also ties into tourism — the commonwealth’s No. 2 industry. Agritourism operations like the one at Sandy River bring people out to the country and give them a chance to see what we do here.”

“About 12 years ago we realized that a lot of agricultural businesses needed an extra hand,” Lohr commented. “The AFID grant program is an opportunity for local business owners and the government to partner in operations that utilize Virginia products.”

“The Prince Edward community has a lot to be proud of,” she said. “Today’s announcement is another big step in building Prince Edward County’s future as a travel destination. The board of supervisors is proud to support the expansion of Sandy River Adventures.”

“They were very helpful in turning me on to the AFID grant program,” he stated.

A homesteader at heart, Smith is excited to share his rural retreat with those from more urban areas.

“I’m excited to be a part of agritourism in Prince Edward,” he added.

“Public-private partnerships are vital to driving economic growth in Prince Edward County,” White said. “This is why the addition of Sandy River Distillery is such an exciting agritourism project, especially with it being the first craft distillery in the county. The company will create six new jobs and four full-time equivalents at an average annual wage of $30,000. Additionally, the company will make $25,325 in the new purchase of Virginia-grown corn, berries and rye, which equates to 45 % of all expected purchases. The Smiths are making a significant investment into their company that the county is happy to support.”

Governor Glenn Youngkin and Delegate James Edmunds also shared their enthusiasm for the new distillery in a press release sent to The Herald.

“Today’s new agriculture and tourism focused announcement shows that the entrepreneurial spirit in Virginia continues to grow,” Youngkin stated. “Sandy River Distillery is giving our residents and our visitors yet another reason to get out and experience all the Commonwealth has to offer.”

Delegate Edmunds said, “Welcoming Sandy River Distillery to the 60th House District is a win-win for everyone involved. In addition to the jobs and the direct economic development that the distillery will bring, I am excited they will be purchasing Virginia’s own commodities such as corn, berries and rye. This will help ensure local farmers and producers continue to be successful.”