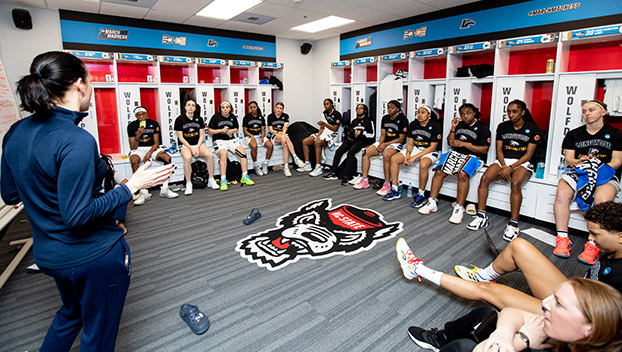 Longwood University Head Coach Rebecca Tillett addresses her team amid its contest against Mount St. Mary’s University in the First Four round of the NCAA Division I Tournament. The Lancers won the game 74-70. (Photo by Courtney Vogel with Longwood University)

The 2021-22 Longwood University women’s basketball team set the standard for all future squads in the program, showing the success that is possible when character and talent meet.

The Lancers finished the season with an overall record of 22-12, marking the first time in the program’s Division I history that it had topped the 20-win plateau.

Then the Lancers advanced through the conference tourney and routed top-seeded Campbell 86-47 in the final to claim their inaugural Big South Tournament championship and first-ever NCAA Division I Tournament berth.

She noted that the first word she would use to describe her team’s 2021-22 season is “historic,” highlighting how any time someone can be part of an endeavor in which they are the first to accomplish something, it is special.

But she pointed out that this group of Lancers had achieved firsts many times prior to this season, with the 2021-22 campaign being the culmination of an unprecedented run that had its roots in 2018.

Tillett took the reins of the program in 2018, and she and the Lancers navigated a challenging inaugural season together, finishing 3-27 overall. There were two freshmen on that team — Akila Smith and guard Milou Vennema.

“Those two were here for the whole journey,” Tillett said.

Then the coach highlighted four key recruits who made the commitment to join the Lancers right after that difficult 2018-19 season — Tra’Dayja Smith, guard Kyla McMakin, guard Anne-Hamilton LeRoy and guard Adriana Shipp.

“Those guys made the choice to say ‘yes’ when we were really struggling,” Tillett said.

Tillett said she and her staff continued to bring in people that aligned with their values and with what they were trying to do as a group in creating this unprecedented run.

“I do think it’s a four-year journey, and I think it’s a commitment by a lot of people — our women, first and foremost,” she said. “They’re the ones that make the incredible commitment to do this, and within that group, there’s some really strong leadership in Tra’Dayja, Akila and Kyla.

“You always hear people talking about their teams or talking about their best seasons, and it always includes their veteran leadership, because those are the teams that go the farthest,” she added. “So those three have just done incredible work with our team.”

Tillett said she and other members of the program talk about the importance of creating a little bit of magic in the course of a run.

She said the 2021-22 team’s success was a product of every member of the program being committed to excellence every day and working together to figure out a way forward when the team fell short.

“Like most championship stories, there is a time of adversity that hits, and for us, the most significant visible one was the two-game slide in the Big South Conference,” Tillett said.

“After we lost to Campbell, I said to our team in the circle, ‘That was a painful loss for us,’” Tillett said, “because we really thought we were one of the top teams in the conference, and they really defeated us. … So really what it came to and what we figured out about ourselves was it was our confidence, specifically against them.”

As Longwood prepared to play USC Upstate, Tillett said, “I just knew that our collective confidence as a group was not in the right place, and Upstate was an upstart team. They were picked low in the conference, and they were playing really well.”

“And it takes some incredible leadership on behalf of the women to stay the course,” the coach said, but she noted that the team’s leaders committed to do exactly that.

“We actually had the best practice of the year the day after we lost to Upstate, which is not the storyline most people have,” Tillett said. “You have two losses in a row, they’re painful, and then you don’t have the best practice.”

She explained that one of the rules of Lancer practices is that they never end in a tie.

“So they tied a drill, and then it becomes a playoff,” she said. “Well, we got stuck in this really long playoff game where each team just matched the other team’s big play over and over, and it just showed their competitiveness, their resilience, their leadership, their joy, all of that (which) enabled us to ultimately do what we were able to do.”

Tillett said the team’s unprecedented achievement from this past season that was most satisfying to her was the Big South Tournament championship win, particularly given the way the Lancers started that game.

“We had done so much preparation specifically for Campbell as our opponent, because we really did feel like Campbell had our number for a long time,” she said. “I really felt good going into the game that we were going to compete at a high level and that we had finally overcome the confidence part of playing them that was going to be so important, and as a coach you work so hard to get people in the zone. Well, Dayday and Kyla started the game in the zone.”

McMakin hit two baskets to kickstart a 17-0 run to start the game, and the Lancers led 38-13 at halftime.

Tillett said McMakin thought that she struggled individually while playing against Campbell in previous games, so for her to come out so strong and basically tell her team, ‘This is how today is going to go’ was powerful.

And then Tra’Dayja Smith produced an elite offensive performance as both a scorer and facilitator that was rivaled only by how well she played against No. 1 North Carolina State University in the NCAA Tournament.

Tillett noted that seasons are always about the journey that each player goes on, and this season was no different.

Except for Longwood Assistant Coach Ka’lia Johnson, who was part of the NCAA Division I Tournament as a player at Duke University, this was the first time any members of the 2021-22 Longwood team had been in that Big Dance environment, and Tillett said, “That environment teaches you something.”

She said her goal now is to lead as many teams as she can to that experience.

And having had that experience the first time will have an impact on future Longwood teams.

“We’re watching games after we’re eliminated from the NCAA Tournament, and announcers are still talking about our team, and in recruiting, that’s gold,” Tillett said.

With the Longwood men’s team also winning the Big South title and making it to March Madness for the first time this year, the school has been put on the map in an unprecedented way.

Tillett now has a powerful message she can share with future recruits.

“In terms of recruiting, every recruit’s dream is to play in the NCAA Tournament — every single one,” Tillett said. “So we now have something that we can tangibly offer and say, ‘Well, we’ve done that. We know the process it takes. Come here and do it with us.’”