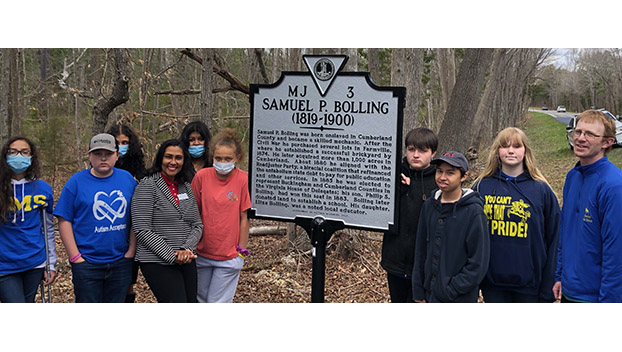 Born into slavery in 1819, Bolling went on to become a successful entrepreneur and was later elected to the Virginia House of Delegates as a member of the Readjuster Party, a biracial coalition which accomplished significant reforms in the late 1800s.

Officially dedicated on Friday, April 1, the full text of the marker reads:

Samuel P. Bolling was born enslaved in Cumberland County and became a skilled mechanic. After the Civil War he purchased several lots in Farmville, where he established a successful brickyard by 1874. He later acquired more than 1,000 acres in Cumberland. About 1880 he aligned with the Readjuster Party, a biracial coalition that refinanced the antebellum state debt to pay for public education and other services. In 1885 he was elected to represent Buckingham and Cumberland Counties in the Virginia House of Delegates; his son, Philip S. Bolling, had won this seat in 1883. Bolling later donated land to establish a school. His daughter, Eliza Bolling, was a noted local educator.

During the dedication President of AMMD Pine Grove Project Muriel Miller Branch commended the student’s efforts, “I applaud the students at Cumberland County Middle School who researched and wrote the text for the Samuel P. Bolling historic marker. My heart leaps with joy that our future is in the hands of these young scholars whose work produced a permanent memorial, testifying to the significant contributions a prominent Black son of Cumberland County made to the educational, spiritual, economic and political life of the County.”