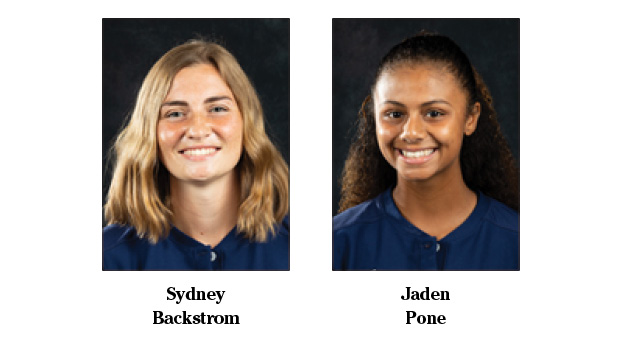 Longwood softball’s Sydney Backstrom and Jaden Pone earn Big South weekly awards after stellar performance on both sides of the ball in the North Carolina home sweep over the weekend.

Backstrom (9-9) pitched 17 innings last week in the 3-2 week for Longwood. She threw 28 strikeouts, and grabbed two wins in the conference sweep over North Carolina A&T. Backstrom’s b/avg against her was .156, with one of those teams being the #5 team in the country, the Virginia Tech Hokies.

During her time in the circle against the Hokies, Backstrom held the ranked team hitless through six innings. In the first of her two appearances against the Aggies, Backstrom tied her career high 13 strikeouts in a single game. She threw 10 straight, putting up three perfect innings in game one.

Pone’s recognition comes as the freshman’s first Big South Freshman of the Week honor of her career. Pone’s has kept her start streak alive from left field as the rookie lead off slapper for the Lancers. Pone’s b/avg last week was .400 (6-15), with a slg% of .467 – amongst the highest on the team from the previous week. Pone added a double and an RBI on the year against the Aggies, but her greatest impact was in game three of the Aggie series.

Top of the order rounded out and Pone saw herself up to bat in the bottom of the fifth with two outs recorded. One slap from the lefty, mixed with the freshman’s speed down the first baseline kept the game alive in the inning for just one more batter — and that was all it took. Next up, Sydney Guess, was able to see her at bat thanks to Pone which resulted in a walk-off single into right field to end the game at 8-0.

In that same game Sunday, Backstrom earned another 11 strikeouts on the 17 total batters she faced in the 8-0 victory that ended early. Over the entire season, Backstrom has earned 17 starts, appearing 22 games. She has a .185 overall b/avg against with a total of 109.2 innings pitched, and 126 strikeouts.

On the year, Pone has started in 28 games, appearing in 29 for the Lancers. She leads the team with 91 at bats, with a .330 b/avg and .385 slg%. Pone leads the Lancers in runs scored at 16 total, and has collected four RBI’s, two triples, one double, and eight of Longwood’s 48 stolen bases.

Count it all joy: Lancers make history with commitment,…