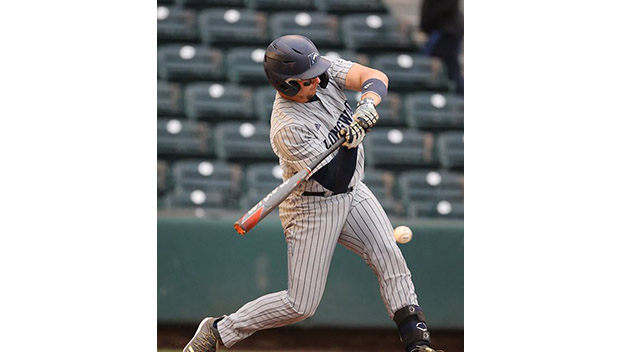 Hunter Gilliam in the box to bat. (Photo by Keith Lucas)

Virginia Commonwealth University (VCU) claimed their eighth straight victory with a walk-off home run against the Longwood Lancers. The Rams won the contest 6-5.

VCU scored early in the first inning through a Logan Amiss single that scored Tyler Locklear.

Longwood responded in the fourth inning through a C.J. Faulkenberry double that scored VCU transfer, Gregory Ryan. Ryan would hit a sacrifice fly in the top half of the fifth that saw Eliot Dix score.

The Rams have been resilient during their win streak and answered immediately in the home half of the fifth inning through a Locklear double and a Will Carlone single that scored Scotty O’Bryan and Amiss, respectively, giving VCU the lead by one.

The Lancers used a flurry of hits in the top half of the sixth that saw three score and gave Longwood the lead right back. Hayden Harris, Dix and Gilliam hit consecutive RBI singles to give their side the edge heading into the final third of the game.

In the bottom of the sixth Locklear singled in a run to bring the game within one. The preseason All-American followed up the clutch at bat with a game tying solo shot in the home half of the eighth.

In the bottom of the ninth, Will Carlone drove an 0-1 pitch out of the park, completing the comeback for a walk off victory for the Rams.

Hunter Gilliam led the Longwood offense with three hits and an RBI. Longwood finished with 10 hits with eight batters recording a base knock.

Cole Taylor started on the mound for Longwood and threw four innings of three hit baseball and he surrendered one run. The Lancers would use five pitchers in relief, and the bullpen gave up five runs on nine hits and walked two. Nick Karlinchak (0-2) was on the mound for the ninth inning and picked up the loss.

“Tonight was a great game,” explained head coach Chad Oxendine following the thriller that didn’t bounce the Lancers way. “We have to continue doing things the right way. Trust the process and work harder than before.”

“We have a huge weekend against a very solid opponent. We must continue to get better.”