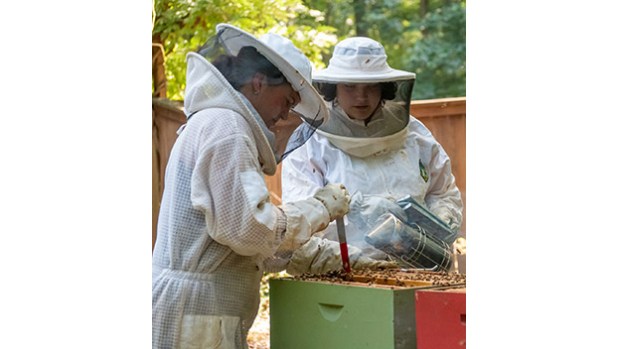 Farmville resident and beekeeper Casey Fletcher loves beekeeping, and her 13-year-old niece, Haley Abbott, has recently developed an interest in the hobby as well. Here, the two use smoke to calm the honeybees. (Photo by Matthew Fletcher) 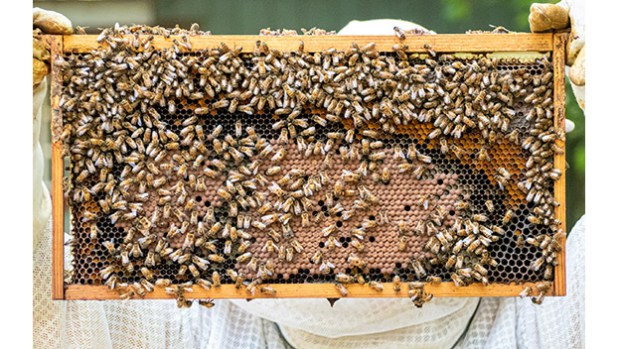 Honeybees are invaluable members of our ecosystem and pollinate the many different plants that humans and other animals consume. (Photo by Matthew Fletcher) 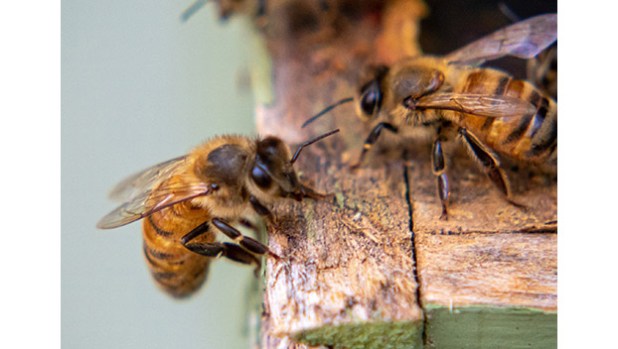 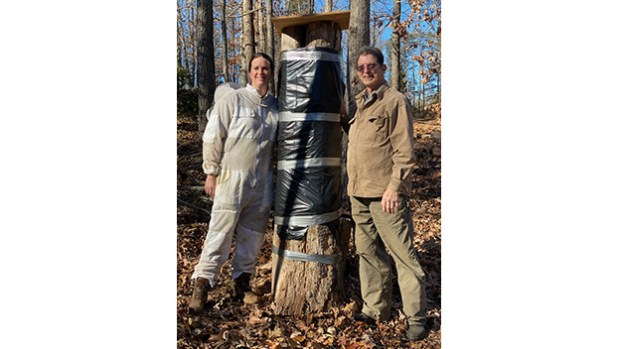 Casey Fletcher was first introduced to the Heart of Virginia Beekeepers club when a windstorm knocked down a gum tree which contained a hive of unmanaged bees. Club President Tommy Nelson helped Fletcher to rescue the colony, and Fletcher joined the group shortly after. Pictured, from left, are Fletcher and Nelson with the “gum tree hive.” (Photo by Matthew Fletcher) 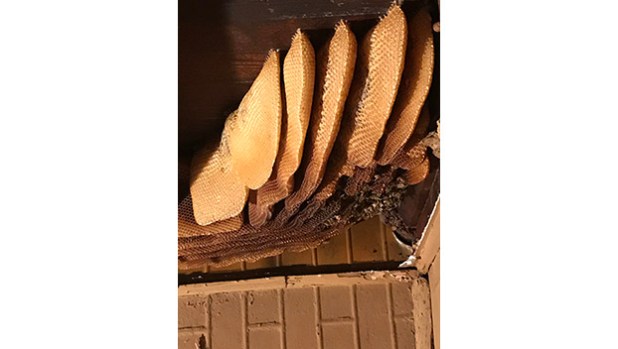 Members of the club are often called out to assist in removing an unmanaged beehive from pieces of property in the area. This hive popped up at a cabin in Cumberland County. (Photo by Dale Pruitt) 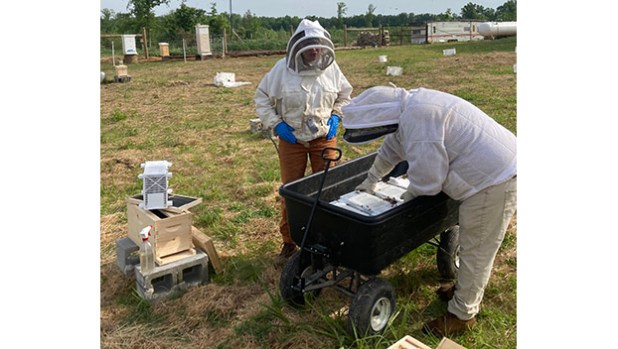 Above, members of the Heart of Virginia Beekeepers organization work to install 40 “packages” of bees. (Photo by Dale Pruitt) 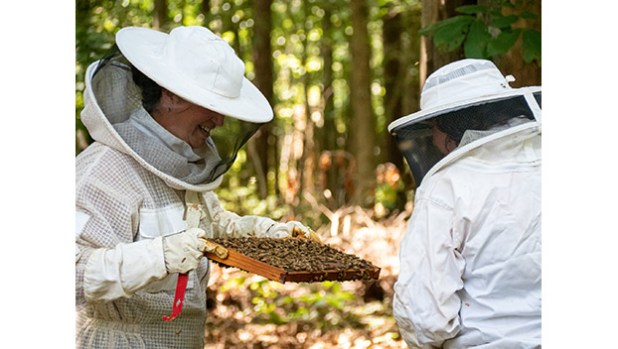 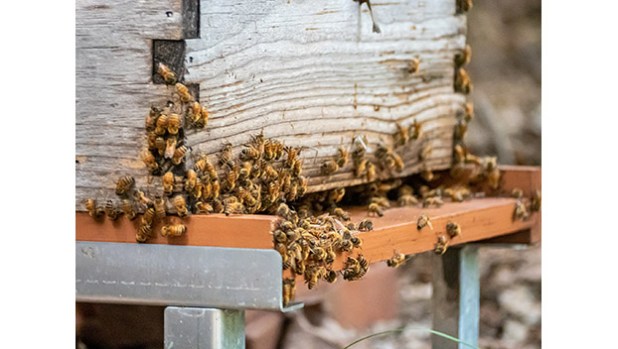 Bees get most of their carbohydrates by consuming nectar, while the majority of the protein in their diet comes from pollen. (Photo by Matthew Fletcher) 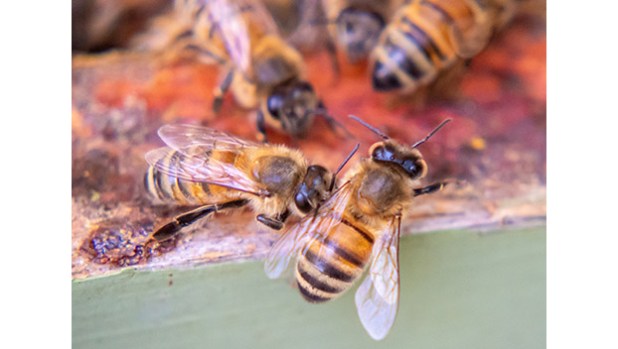 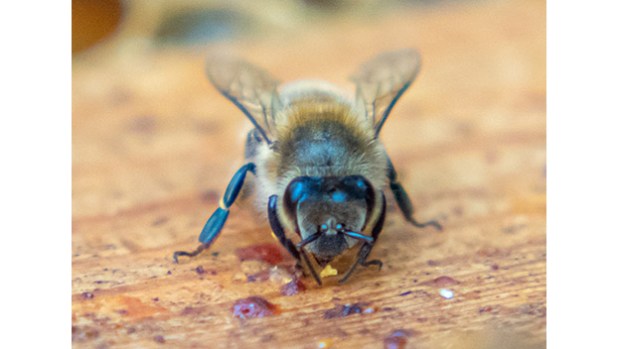 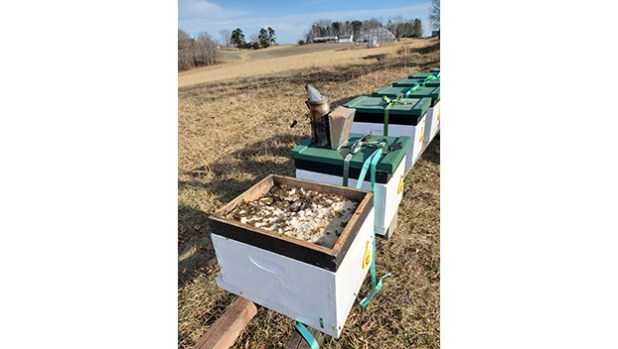 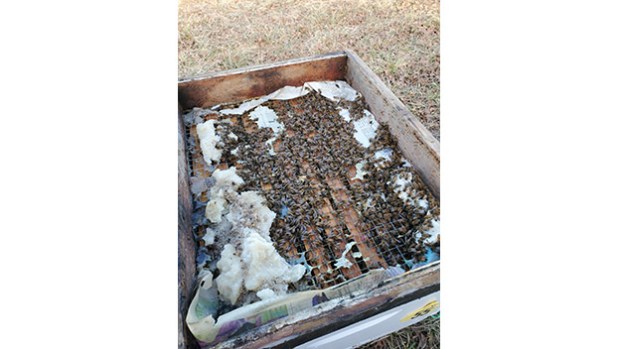 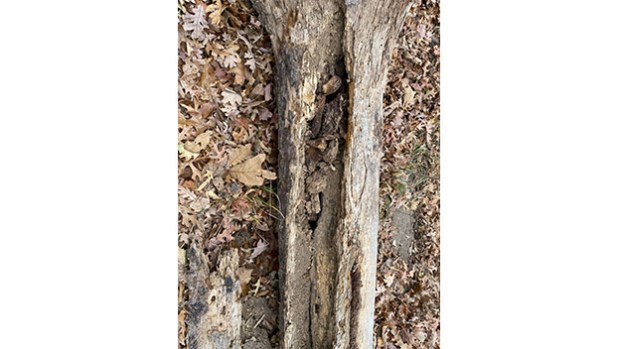 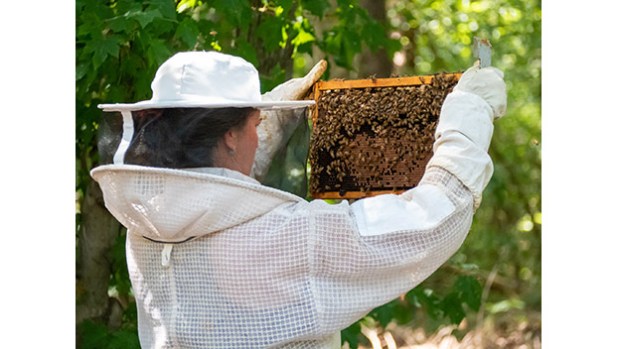 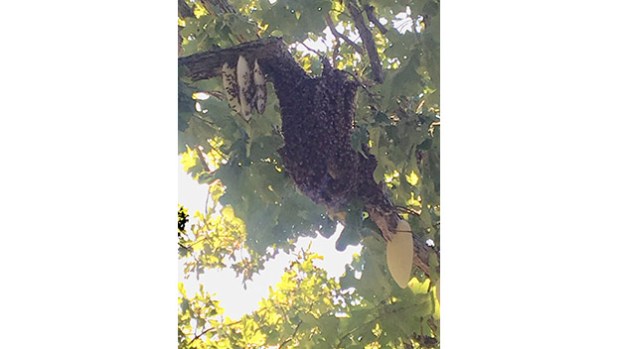 Honeybees are one of the most important members of our ecosystem. As pollinators, they play a vital role in the growth and health of countless types of flowers, trees and crops. And, of course, the honey they produce is enjoyed by many creatures, including us humans.

Beekeepers, or apiarists as they’re often called, devote much of their time to managing their own colonies of these pint-sized wonders. A buzzing curiosity has led many locals to take up beekeeping as a hobby or even a profession, and a large number of those local bee enthusiasts can be traced back to The Heart of Virginia Beekeepers.

According to President Tommy Nelson, The Heart of Virginia Beekeepers is a local organization whose purpose is to educate the public about honeybees in order to protect the local bee population and reduce fear of honeybees. The club has an outreach program where members deliver presentations on honeybees and beekeeping, and members meet monthly at the local Prince Edward County Extension Office.

Nelson, a Charlotte County resident, has been keeping bees for approximately 15 years but remembers working with bees throughout his childhood.

“Bees were in my life as a child,” Nelson said during an early February interview. “My dad had bees, and back in the early 60s, we would find trees out on the farm that had bees in them, and we would harvest honey from them.”

Of course, beekeeping has changed a lot through the years. Today, Nelson has some 40 beehives located in Charlotte County. He considers his bees as a second business through his successful honey sales, and he’s also known locally for being the person to call when someone wants to remove unmanaged bees from their property, a task he and other members of the group stay busy with from spring to midsummer.

The club, founded around 2003, serves as an excellent resource for established beekeepers and “freshman” apiarists alike. With a huge coverage area, members hail from all over central Virginia, including counties such as Appomattox, Prince Edward, Buckingham, Cumberland, Charlotte, Dinwiddie, Lunenburg, Nottoway and Powhatan.

“These folks are traveling a good distance to come to Farmville for a bee club,” Nelson said.

But locals used to travel a lot further in order to get their beekeeping fix. According to Nelson, before the local group existed, beekeepers from the area would head out to Lynchburg in order to attend the nearest beekeeping club. Founding members decided to break off from the Lynchburg group in order to start a local association, and The Heart of Virginia Beekeepers was born. The club itself is a member of a district of beekeeping groups, and those districts are in turn a part of a statewide beekeepers association.

Apiarists of all ages and backgrounds gather together at the club’s monthly meeting to discuss agenda items and listen to programs and presentations surrounding what’s going on in the present year’s bee calendar, a helpful resource which the members use to keep track of important dates such as when to set out “bait hives” to attract unmanaged bees or when to harvest honey. This is especially helpful for newer beekeepers.

One of the group’s biggest annual activities occurs from late January to the end of February when the club hosts a beekeepers school. This is a crash course for those interested in keeping bees. Students learn the ins and outs of beekeeping, and by the first of April, they’ve received their equipment and woodenware and are ready to welcome their first bees.

Nelson highlighted that most of the group’s members are “backyard beekeepers” who generally start out with around two hives. If they’re successful, those amazing little honeybees will serve as a honey source for themselves and their family.

So, what makes this such an exciting hobby for so many individuals? There’s a variety of reasons why someone might want to become a beekeeper. While Nelson is the first to admit it’s not a cheap hobby, beekeeping can provide folks with a great deal of satisfaction, be it from connecting with nature or doing something good for the environment.

“I got started into bees because I had a large garden, and I felt like bees and a garden went together,” he laughed. “I don’t have as large a garden now, and I’ve got more bees.”

Cumberland resident and club member Dale Pruitt said he became interested in honeybees after witnessing his father raise bees. Pruitt, who has had up to eight hives at once, said he joined the group to keep up to date on beekeeping strategies.

“It’s not an exact science, so every day, it’s something different,” Pruitt said. “It’s amazing to see how a group of insects work for the benefit of the group.”

Club member Casey Fletcher, who lives on the Cumberland County side of Farmville, said she got into beekeeping seven years ago when living in Springfield, Massachusetts.

“An apiarist out of South Hadley was looking for land to place hives, and I had 11 acres that I was tending organically,” she recalled. “I’d always wanted to get into beekeeping, so it was the perfect opportunity to learn!”

After two years of mentorship, Fletcher purchased the hives from the apiarist and began managing them under his guidance.

A year and a half ago, Fletcher moved to Farmville and quickly realized the change in climate meant she needed to change how she managed her bees. She was introduced to The Heart of Virginia Beekeepers when a tree housing an unmanaged colony of honeybees fell during a windstorm.

“I was directed to Tommy Nelson to get assistance in saving this colony,” she said. “He taught me about the ‘gum tree hive,’ helped me rescue this colony and introduced me to the Heart of Virginia Beekeepers.”

Fletcher has managed up to six hives at one time, but currently she’s down to one after taking some time to learn how the climate in Virginia impacts bees. She is looking forward to building that number back up during the coming season.

While spring is almost upon the Heart of Virginia, Nelson explained that for local beekeepers, the bee season starts the day after the winter solstice in December.

“It’s a gradual buildup,” he stated. “Beekeepers, this time of year, they’re reading and studying and trying to decide if they’re going to do the same thing this year that they did last year.”

Of course, for Nelson, the coming season means a growing list of customers that need bee removal services.

“We’re just waiting for spring to start doing that work.”

Not all of the work towards successful beekeeping is being done by humans, however. With the darkness of nightfall now shortening, trees are preparing for budding. The bees, too, are getting excited for the coming months.

“The bees are connected to plant life,” Nelson added, “so they have to start gearing up their population so that when the spring comes, they’re getting close to peak population so that they will have the numbers to do the work in foraging for the pollen and the nectar that they need.”

In late winter, beekeepers are busy checking their hives to see if there’s enough food source in the box so that the bees won’t be starving by mid-March.

Just like crops, the honey produced by bees is heavily impacted by the weather. Beekeepers typically harvest their honey between mid-June and the first of July. Provided that it’s been a good season, the club members will meet in the fall for a special honey tasting event. Members present their best honey harvested that same year, and categories include light, medium and dark honey. While some beekeepers take their honey to bigger competitions such as the State Fair, the club’s honey tasting is just for fun.

For folks like Fletcher, the club has served as a fantastic resource for all aspects of raising honeybees.

“Being a part of this group has already been invaluable,” she said. “I’ve attended seminars about best practices for managing hives, registered for a course and have gotten connected to a local community of apiarists of all levels of experience. When learning bees, there’s no greater resource than those who are facing the same environmental factors as you. Beekeeping is both a science and an art, and I love that the association provides a space where I can seek advice, skill building opportunities, equipment and livestock. Plus, how often can you hang with a group of folks and laugh at bee jokes?”

For questions about beekeeping or more information on the Heart of Virginia Beekeepers, go to https://heartofvirginiabeekeepers.org/ or send an email to Club Secretary Mary Jane Morgan at wmorgan476@gmail.com.