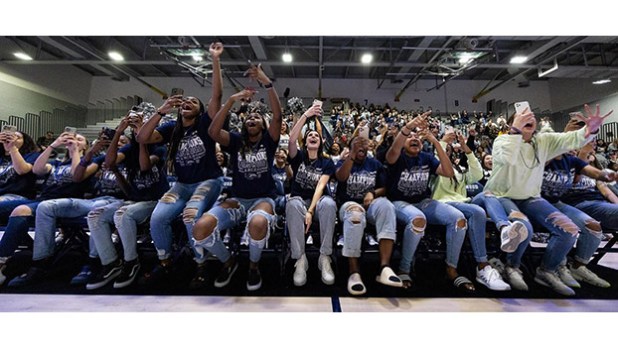 (MIKE KROPF) The Longwood women’s basketball team reacts to the announcement of who they will play during the Selection Sunday Watch Party. 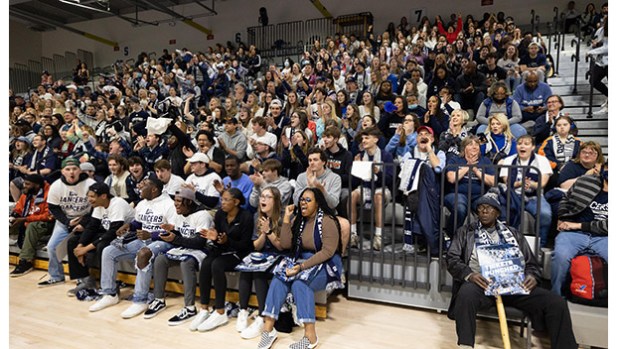 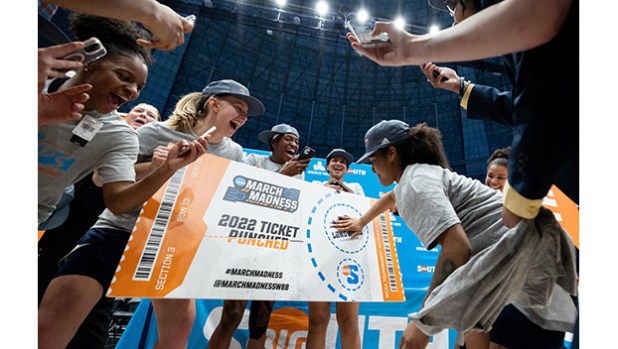 (LONGWOOD ATHLETICS) Tra’Dayja Smith applies the Longwood sticker to the punched ticket for March Madness after the Big South Tournament.

When the announcement came across on ESPN: the Lancers would take on Mount St. Mary’s in the first round of the NCAA Tournament, there was no one else the Lancers could turn to but each other.

No coach, no fan, no family member can take the place of the sisterhood that has been at the center of the Longwood team’s meteoric rise to the top of the Big South Conference and the university’s first-ever NCAA Tournament Appearance.

All around them in Willett Hall Sunday night, fans exploded as the ESPN announcers announced that Number 1 seed North Carolina State will face the winner of Longwood and Mount St. Mary’s.

The Lancers, who won the Big South Conference Title in one of the most lopsided games in league history, will tip off their first-round game on Thursday, March 17, in Raleigh, N.C. as a 16 seed. Their opponent: a 16-win squad that won the Northeast Conference Tournament Sunday, March 13.

“It’s all about these women and those men and all the work they put in and all the people behind them who led to this moment,” said Head Coach Rebecca Tillett. “So if you are a supporter of women’s basketball, turn on your television and watch the women play!”

Before the selection show started, the packed Willett Hall stands burst into an impromptu rendition of “Happy Birthday” for senior forward and Big South Player of the Year Akila Smith, who was the number 3-ranked player in the country for blocks.

These Lancers have been the catalyst of a remarkable turnaround. Just three seasons ago, the team ended the season with a record of 3-27 and in last place in the Big South. But through perseverance, growth, and an unshakable bond that emerged between them, the team not only rose above previous high-water marks, they clinched the team’s first-ever share of the Big South regular season title and then left no doubt in the conference tournament.

Leading the way is a three-pronged attack that, when clicking, is hard for any team to defend. Big South Conference Player of the Year Akila Smith finished the regular season third in blocks in the nation. All Big South guard Kyla McMakin led the team with more than 18 points per game. Big South Tournament MVP Tra’Dayja Smith dished out more than 5 assists per game.

And with every basket, every block, every pick-and-roll that find an open layup, the bench explodes in joy, punctuating the moment with hugs and screams of encouragement. Many times, they are the loudest part of the gym, their cheering towering over a packed student section in Willett Hall.

“In a moment like this as the Lancers get set to take the national stage in March Madness, we’re so proud of the teams, and Coach Aldrich, Coach Tillett, Michelle Meadows, and all of our coaches, staff, and student athletes, with so much achievement on the court and off,” said Longwood President W. Taylor Reveley IV. “It’s a moment when I’m also thoughtful of and so grateful to the great figures over Longwood’s history who led the way–Jerome Kersey, Colin Ducharme, Coach Shirley Duncan, Dr. Barbara Smith, who made the Lancers national champions, Troy Austin, President Henry Willett, so long the Lancers biggest fan, and President Patty Cormier, who had a vision of Longwood’s name in lights.”

Now, with history in their pockets, the team is playing with an incredible sense of confidence and accomplishment having secured their place in the Longwood record books. They’ll take that on the road as they travel to Raleigh this week.

They’ve cut down two nets together this season. But they feel like they are ready for more.