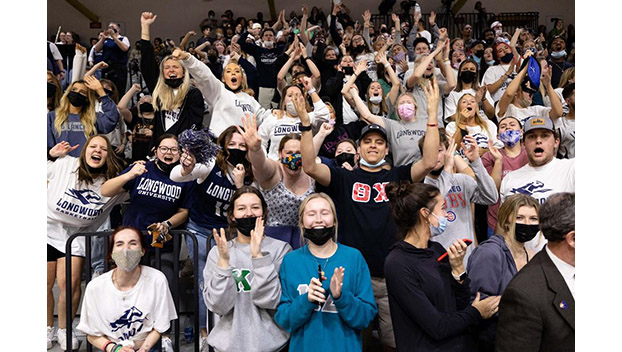 The crowd in Willett Hall is always electric with their support for the Lancers. (Photo by Mike Kropf)

Longwood men’s and women’s basketball teams made history last weekend when each won their Big South Tournaments earning them a place in the NCAA Division I Tournament. The lineup for round one of the NCAA tournament is set to be announced Sunday, March 13 and the Lancers plan to host a NCAA Selection Show watch party.

Fans and community members are invited to join the men’s and women’s basketball teams for the watch party which will be held in Willett Hall. The doors open at 5 p.m. and the men’s show starts at 6 p.m. The women’s brackets are revealed at 8 p.m. This is a free event with first-come first seated.

Matt McWilliams assistant vice president of communications stated, “We are thrilled to welcome back the community and fans who have been so supportive of these teams all year to celebrate their historic accomplishments in Willett Hall. The energy of the stands—not only students but also the community members who came out—made Willett one of the toughest places to play in the country. There’s no more fitting place to watch Selection Sunday with the teams than there. I’m sure we will Pack The Hall one more time this year and give our Lancers the kind of send-off they deserve!”