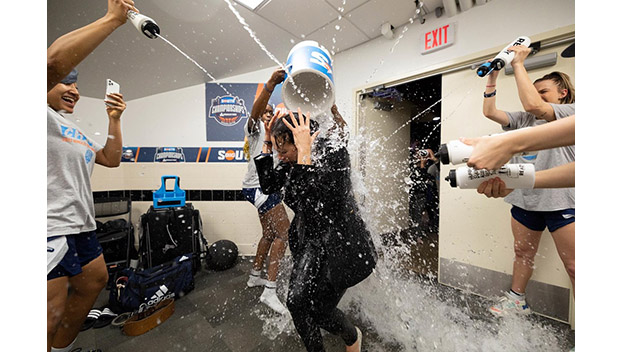 Longwood University Women’s Basketball Head Coach Rebecca Tillett is drenched by her players in celebration of the team’s dominant Big South Tournament championship win that earned the Lancers their first-ever trip to the NCAA Division I Tournament. (Photo by Mike Kropf)

By midnight — eight hours and one more dominant Big South championship game victory later — it was twice as good.

Get ready for a busy March, Lancer Nation. Your women’s basketball team is also headed to its first-ever NCAA Division I Tournament.

These Lancer women aren’t just sneaking into the Big Dance. They smashed a top-seeded Campbell University team 86-47 that had beaten Longwood twice during the regular season. The blowout cemented the transformation of a Longwood program under Head Coach Rebecca Tillett that went — in just three seasons — from 3-27 to Big South Tournament champions that now have the opportunity to play in March Madness.

“It feels like time slows down a little,” a hoarse Tillett said of the surprisingly relaxed final minutes. “You’re just so excited that the players are able to experience that. And you think about all the people that have poured into this — support staff, administration, the Farmville community, Longwood community. It takes everybody to win a championship.”

Play like they did Sunday, and Longwood won’t be an easy draw for anybody once the NCAA Tournament begins.

Longwood actually put this one away long before midnight.

Five minutes after the 8:30 p.m. tipoff on ESPNU, Longwood (21-11) was already up 17-0. It hit 10-of-13 shots in the first quarter, including all four 3-point attempts, and by halftime had stretched the lead to 38-13. The defense wasn’t bad either; Longwood forced 14 Campbell (23-7) turnovers and held the Camels to just two points in the second quarter. Then Longwood scored the first seven points after intermission and was soon up 50-15.

Cheered on at Bojangles Coliseum by a strong contingent of fans including members of the Longwood men’s team who stuck around after their commanding 79-58 Big South title game win over Winthrop University earlier Sunday, the Lancers had plenty of time in the fourth quarter to celebrate and play their reserves.

It was almost hard to believe this is the same team that lost twice to Campbell in the regular season — once by 28 points. And it isn’t the same team. Over the last few weeks, Longwood has found a higher gear — and become a championship-caliber defensive team.

Winners now of nine straight, including a comparably dominant semifinal win Saturday, March 5, over UNC Asheville, the Lancers left little doubt the best team in the Big South will represent the conference in the NCAA Tournament.

“They were so good for so long,” Tillett said of the Camels. The team’s trick was it didn’t even say the word “Campbell” over the back half of the season — but focused relentlessly on improving enough to beat them.

“(Campbell) did have our number,” Tillett said. “And we’ve been working every day since the first loss to figure that out in every practice and in every game. Because this is where we wanted to be. Sometimes things have a way of working out, and for these guys they did.”

It was a remarkable finale to an unforgettable weekend for Lancer Nation, which saw six wins in four days between the two teams. Fans, cheerleaders, the Stampede pep band and students turned the Bojangles Coliseum into Willett Hall South — bringing notably more noise than other conference members located much closer to Charlotte, North Carolina.

The outcome — not just the results but the two commanding championship game wins on national television — was all Longwood could have hoped for. Only three times in Big South history has the same institution claimed the men’s and women’s basketball titles in the same year. Only once before had two teams at the same institution each won the regular season and tournament titles in the same year.

Tillett and Longwood Men’s Basketball Head Coach Griff Aldrich were introduced together as Longwood head coaches on the same day in April 2018. Now, on the same day nearly four years later, both advanced to the NCAA Tournament.

“We both use different words, but it’s a really similar process,” Tillett said of the two coaches’ combined success. “I can’t wait for both of us to be able to really enjoy this with our teams.”

Now both Lancer teams head back to Farmville to celebrate, rest — and start getting ready for March Madness. They’ll find out who they play on Selection Sunday, March 13.