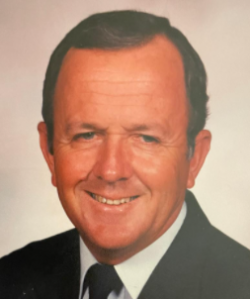 Lacy Wilbur Mylum, 78 passed away peacefully on March 24, at his home. He was preceded in death by his parents, Charles and Elinor Mylum; infant son, Lacy Gordon Mylum and older brother Wilson “Duke” Mylum.

Lacy spent his career in the building supply business, retiring as president of Keysville Building Supply.

His passions, however, were farming and gardening. Lacy was born and raised on a tobacco farm, where he continued the family tradition for most of his adult life. He loved growing a large garden, from which he shared many vegetables with family and neighbors.

Lacy was a devout Christian, and a lifetime member of Douglas Presbyterian Church, where services were held on Sunday, March 27, at 2 p.m. A visitation with the family began prior to the service at 12:30 at the church.

In lieu of flowers, please consider making a memorial contribution to one of Lacy’s favorite charities, Meals on Wheels of Charlotte County or St. Jude’s Children’s Cancer Research Hospital.