Inductees to Hall of Fame honored 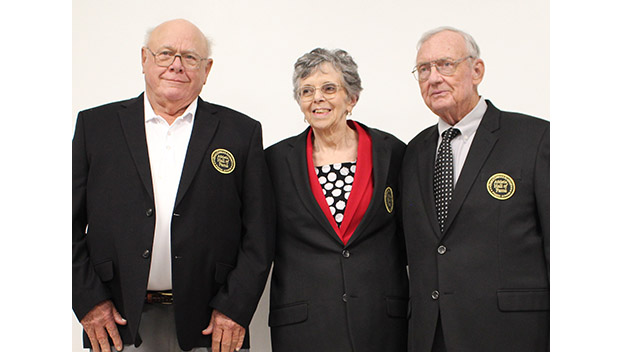 In his opening comments of the evening, Chance Reynolds, Head of School commented, “During their tenure, these three men became the examples our athletes followed, the voices they heard, and the smiles seen when our alumni look back upon these years. It seems only fitting that all three would become the newest members of the PEA/Fuqua School Athletics Hall of Fame.”

Keith Dickson ‘72, Professor Emeritus, National Defense University, retired Colonel, U.S. Army Special Forces posed the question, “Why was the football experience here so long ago so unique and so memorable?” Without a doubt he attributes his experience to these Legends of the Fall. In answering that question, he stated, “These are remarkable men. Nothing fancy, nothing complicated about them. They were straightforward and matter-of-fact, with each man possessing, in his own way, the secret to molding individuals and building them into a team that operated as an extension of their will.” Later in the evening he added, “What a remarkable triumvirate and what imperishable gifts they gave me. When I graduated and left Farmville to go on what has been an altogether remarkable journey, their collective influence, just as remarkably, has stayed with me. I am grateful to have the opportunity to thank them now and assure them that their unique skills have gone far beyond the football field to encompass a multitude of significant personal and professional achievements.”

“It is very difficult to talk about one coach without talking about the other two. They were a trio,” stated Kenneth Batts ’76, and fellow Hall of Famer, in his introduction speech for Coach Addleman, “They challenged us, both mentally and physically, lasting together for close to 40 years.”

Year after year, a tradition of excellence was established by Coaches Fore, Hazelwood and Addleman. Under the leadership of these coaches, the PEA football teams enjoyed unprecedented success from 1968-1992, with an overall winning percentage of .725, 8 conference championships, and an overall record of 148 wins, 56 losses, and 2 ties.