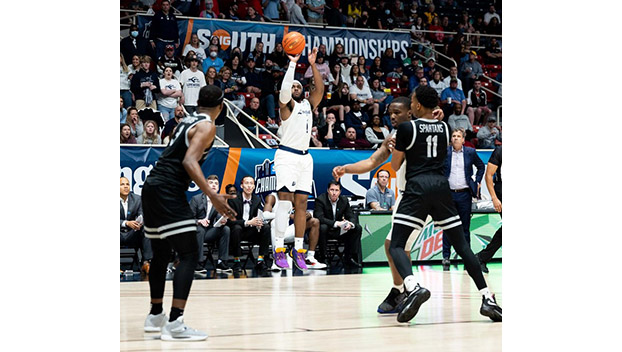 Longwood mens basketball was staring down a bitter ending to its storybook Big South season.

Midway through the first half, the team was down 16 points. In a season of improbable comebacks, this would be the hardest test yet.

One unforgettable comeback later, Longwood (25-6) now gets to do just that. Hop in the car for Charlotte, or settle down in front of ESPN2, at noon Sunday to watch the Lancers play either Winthrop or Gardner-Webb in their first-ever Big South Tournament title game.

Longwood saved its biggest comeback of the year for the moment when it mattered most.

“It’s something that we preach constantly it’s just to stay the course, continue to pour into the root, and just be ourselves,” said Head Coach Griff Aldrich. “They didn’t panic and they just kept on playing one possession at a time, and over the course of 40 minutes we were able to come out the victor. Just really proud of the guys. It takes toughness, not just physically but mentally, to stay locked in.”

For a long stretch Saturday, it sure looked like this might be the end of the road in Longwood’s storybook Big South season.

The Spartans jumped out of the gates straight from tip-off, burying Longwood with lights-out 3-point shooting and jumping ahead 16-3 at the 5-minute mark, then building the lead as high as 25-9 at the midway point before halftime.

But if the Lancers were flustered, they didn’t fold. They settled in on defense, then began chipping away at the lead in the final minutes before halftime. Three-pointers by Hill, Wade and Wilkins provided the offense – and reinvigorated the Longwood-heavy crowd – while a strong defensive stop on the final possession sent Longwood into the locker room down just three points, 36-33.

In the second half, it was Longwood who came out with fire, taking its first lead less than a minute in when Zac Watson fed a running Wilkins for a layup to put the Lancers ahead for the first time, 37-36.

From there on, it was a classic, back-and-forth March Madness fight until around the final three minutes. That’s when Longwood simply did what it has all season – hit clutch shots and free throws, and make key defensive stops, when the game was on the line.

Tied at 63, Hill fed Wade for a 3-pointer with 3:07 to play – and the Lancers wouldn’t relinquish the lead from there. Hill’s jump shot at the 1:53 mark extended the advantage to 5, and the Lancers’ free-throw shooting – a little shaky from the free throw line earlier in the game – iced the win as they hit 9 of 10 free throws in the final minute.

The Lancers have now found themselves behind at some point in the second half 12 times against Big South opponents this year. They’ve won 11 of those games.

“Just stay the course,” Wade said of the Lancers’ comeback formula. “We’ve been here before, plenty of times, maybe not as big of a lead, but we’ve been here a thousand times before. We just had to stick with what we’ve done all year.”

Wade and his teammates now get to live out every basketball player’s dream: a nationally televised game with a chance to move on to the NCAA Tournament for the first time in school history.

“Three years of work, building from the ground up,” Wade said. “Coming in here not really knowing what to expect. It’s just amazing. I can’t even explain it. You always think you’re going to be here, but you never know. For it to happen, it’s surreal.”

It will also be a thrill for the hundreds of Lancer students, alumni and fans who made the trip to Charlotte to cheer – many of them on their feet from tipoff till the final buzzer.

“It’s really been special. I think the University has done an amazing job to rally around our men’s and our women’s teams, who are both having great years,” Aldrich said. “It’s fun to see the alumni and the students have so much enthusiasm and pride, not just in the team but in the school. We really want our team to be about much more than the 16 guys in the locker room. It’s about the university, it’s about the community. We’re just representatives.”

Aldrich hasn’t had much time yet to reflect on this remarkable season. But he knows it’s special.

There will be plenty of time for more reflection after the season. For now, Longwood is focused on Sunday.

“We’ve got one shot at it,” Aldrich said. “We’ll put our best foot forward.”

Lancers pull out another thriller in overtime