End of the road: Longwood falls to Tennessee 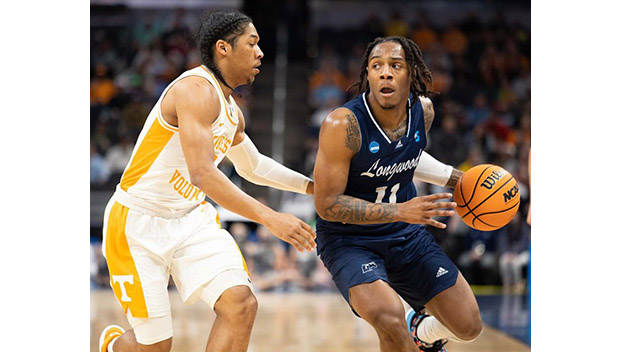 Justin Hill had 13 points in the game against Tennessee. (Photo by Mike Kropf)

It was a magical journey Lancer Nation will never forget. The end came Thursday without the Cinderella upset Longwood fans dared to hope for — but heads held high.

Beating No. 3 seed and SEC champion Tennessee would have taken a perfect game by Longwood and luck with their opponent. Instead, the Lancers ran into a Volunteer juggernaut that seemingly couldn’t miss, showing why many think they’re bound for the Final Four en route to an 88-65 first-round win.

Even in the sting of the moment, Longwood’s players and coaches knew the past few weeks were something they would never forget.

“Obviously today isn’t the way we wanted it to play out, but I think in no way does it take away from the season that our guys had this year,” Head Coach Griff Aldrich said. “I told them in the locker room how proud I was of what they had accomplished this year. When you’re 18-22 years old you don’t quite understand things the ways 47 year-olds do. But it’s just a special, special season and a really special group of guys, and I could not be more proud.”

The throng of Longwood supporters who traveled to cheer on the Lancers in their first-ever NCAA Division I Tournament game saw Longwood hold close early. But Tennessee shot 60 percent from the floor, hit 14 3-pointers and raced to a commanding 25-point halftime lead that was too big a hole for Longwood to escape.

“We didn’t play the way I think Longwood necessarily plays,” Aldrich said. “But at the same time the guys played hard, they gave it everything they had. If we do that, we can live with the result.”

Justin Hill scored 13 points for the Lancers, who finished the season 26-7 – by far their best-ever record in Division I.

The loss couldn’t erase a storybook journey that built from January through March all across Lancer Nation – in packed home games at Willett Hall, at the Big South Tournament in Charlotte, and finally Thursday at watch parties on campus and around the country — not to mention on-site under the bright lights of March Madness at Gainbridge Fieldhouse in Indianapolis before a CBS national television audience.

Senior DeShaun Wade said even amidst the disappointment of the loss, he was able to take in the moment he’d dreamed of – playing in the NCAA Tournament.

“Right after the game, I just remember looking up, just looking at how big the arena was, and there’s people all the way at the top,” Wade said. “I was looking at the scoreboards, looking at my dad and my mom in the stands and the fans and how many people we’ve just impacted. I was like, ‘man, win, lose or draw, it was a great season.'”

“I feel like we changed the culture and impacted a lot of people” Hill said.

The season had so many milestones it’s hard to know where even to begin. The 26-7 overall record, and 15-1 in the Big South – marks that obliterated the Longwood record book. The 16-1 mark in Willett Hall, which became an electric home court advantage. The first home game televised on ESPN. The way the team just got better and better over the course of the season – losing just once between December 22nd and the NCAA Tournament.

Not just the wins but the way they won – victorious in a dozen Big South contests after they trailed at some point in the second half. The dramatic last-minute comeback at Presbyterian, the game-saving defensive stop at Charleston Southern. And of course the Big South Tournament – packing into three thrilling days an overtime win over North Carolina A&T, rallying from 16 points down to beat USC-Upstate in the semi-finals, and finally a dominating championship game victory over perennial league power and two-time defending champion Winthrop.

There were first-team all-conference honors for Justin Hill and Isaiah Wilkins, and an honorable mention for DeShaun Wade. But the defining trait of this team was unselfishness. Seven different players led the Lancers in scoring over the course of the season.

The days leading up to the NCAA Tournament brought extraordinary attention to Longwood – ESPN, CBS News, the Washington Post, Wall Street Journal, NPR, AP, countless Virginia and national TV and radio appearances – as America seemed to adopt the Lancers for a Cinderella story.

Loose and confident heading into the game, there was no doubt Longwood believed it could pull off the upset. But against a ferocious defensive and 3-point shooting team that also had dominating size in the paint, they’d need an off-night from Tennessee. Instead, they seemed to get the Volunteers at their best. Guard Santiago Vescovi in particular was devastating, hitting six of his eight 3-point attempts for 18 points.

What should comfort disappointed Lancer fans is that what they saw this year shows every indication of being a program “On the Rise” – not just a team enjoying its “One Shining Moment.”

Lots of this year’s talent will be back next season, and Longwood basketball is no longer a recruiting secret. The new Joan Perry Brock Center will open in 2023. The media attention, the impact on philanthropy – all will, in the phrase Aldrich often uses, “pour into the root.” All along, the Longwood coach has emphasized his goal has been to build something lasting– and there is every reason to believe that’s what this program has done.

“The goal has always been to build a sustainable program that will compete for championships year-in and year-out,” Aldrich told reporters afterwards. “From that perspective, this is really important. It’s important for our guys to have a taste of this experience. You know, the second time through is always easier. The second time you make it to The Dance, there won’t be as much allure, mostly from you all. And so that will be okay. That will be fine.”

What that means for Longwood fans is the taste of March Madness they got this year was special. But it will not be the last in Farmville.