Cinderella is Ready to Dance 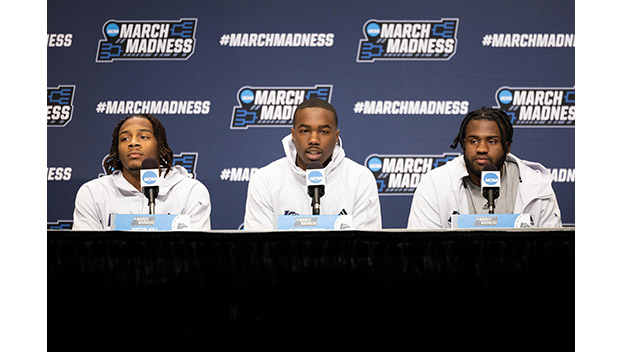 The eyes of the world are now on Longwood basketball. Wednesday was Media Day, and before taking the court for a shoot-around Gainbridge Fieldhouse in Indianapolis, seniors DeShaun Wade and Isaiah Wilkins fielded a question from the assembled reporters on a lot of minds:

In a David-Goliath matchup Thursday against SEC Champion, where does Longwood’s confidence come from?

“We have good team chemistry. We all love each other,” Wade said. “This team doesn’t really care about who is getting what, what award, none of that. We’re all just playing for each other.”

Added Wilkins: “I think it also comes from who we are as people. A lot of us flew under the radar, not getting as many looks and just wanting to be seen. Our confidence comes from playing against those types of guys and getting a chance to go out and prove ourselves.”

They could have been talking about themselves, about the team – or about all of Longwood, a place perhaps once overlooked, but which over these past few weeks has grabbed the attention of the college basketball world on a magic run to March Madness.

It’s already been unforgettable. Against No. 3 seed Tennessee – a team many think should have been seeded even higher – keeping it going would be nothing short of a miracle.

But every year there’s a Cinderella story. Why not us?

“On the one hand, this is a significant moment, not only for these guys but for our university and community back in Virginia,” head coach Griff Aldrich said. “So we need to enjoy the moment. We can’t, you know, let it slip by. But at the same time, the moment can’t be too big.”

“We’ve been working really hard for a long time. I think when one does that, you build confidence through the number of reps, through the growth and the development that the team has experienced with one another.”

No doubt the Lancers will have their hands full with Tennessee. But they bring to the challenge veteran leadership, experience in close games – and a ton of momentum.

When Aldrich, the Big South Coach of the Year, took over four years ago, the team was coming off a 7-win season. Now, in a breakout season that has become a national story, they’re 26-6 and one of the hottest teams in the tournament. They enter Thursday’s nationally televised showdown on CBS winners of 19 of their past 20 games, and on an eight-game winning streak that is tied for the fifth-longest active streak of all 68 tournament teams.

Longwood’s tear – which began with a 15-1 run through the Big South regular-season gauntlet – also includes an undefeated run through the Big South Championship tournament and a runaway 79-58 title-game victory over perennial league power Winthrop. That win secured the Lancers’ first Big South basketball title in program history, first NCAA Men’s Basketball Tournament bid, and a spot on a national pedestal that draws tens of millions of viewers annually.

And how the Lancers play has been a sight to behold. As the Big South’s top scoring team, they average a program-record 76.4 points per game and a league-best 14.4 assists per game. As the league’s No. 3 defensive team, they hold opponents to just 65.0 points per game and out rebound them by more than seven boards per game. Longwood ranks among the nation’s top 20 in rebounding margin, scoring margin and three-point percentage, and they have one of mid-major basketball’s most dangerous backcourts spearheaded by All-Big South first-teamers Justin Hill and Wilkins, honorable mention selection Wade and veteran backup point guard and NCAA veteran Jordan Perkins.

While Perkins, a graduate transfer who won three MEAC titles at North Carolina Central, and Wilkins may be the lone Lancers on this year’s roster with experience on the NCAA’s biggest stage, that all changes Thursday.

“We’re seeing all our hard work pay off,” said redshirt sophomore Nate Lliteras, a member of Aldrich’s second Longwood recruiting class who has emerged as a versatile offensive weapon off the bench.

“These past couple weeks have been fulfilling. It’s exciting and we know the importance of playing in the tournament, but we see Thursday as another opportunity to play against a talented opponent. In the end, we just have to go in with the mindset to play how we like to play.”

What has shaped up to be Longwood’s best team of the Division I era, and perhaps ever, is now just hours away from its NCAA coming-out party in Indianapolis. And while much of the nation will get its introduction to Longwood basketball Thursday on CBS, the foundation for what has propped up this Lancer team was poured years ago when Aldrich was named Longwood’s head coach.

Incremental milestones, from the program’s first Division I postseason bid to the College Basketball Invitational in 2019 to record Big South win totals in 2020 and 2021, provided the scaffolding for Longwood to reach even greater heights. Now the Lancers have climbed to a new tier that was once well out of reach, and they’re doing so on firm footing.

One player in Longwood’s locker room who has stood on the NCAA’s biggest stage says this team really could have another chapter to tell in this storybook season.

“We’re expecting to shock the world,” Perkins said. “[At N.C. Central], we expected to do that too, but it’s different playing as a 14-seed this year instead of in a play-in game. I feel like this time we – Longwood – we really, truly feel like we can do something special.”

His advice to his teammates who have yet to play on that national stage?

“Just enjoy it,” Perkins said. “It’s fun. Go out there, have a good time, enjoy the moment and embrace the moment.”