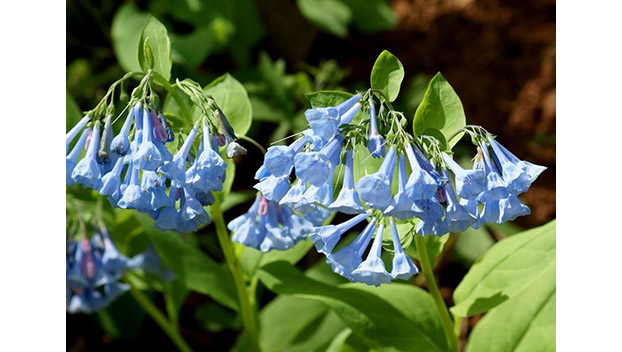 A poll done by YouGov revealed that blue is the favorite color in almost all countries. Ancient Egyptians, Chinese and Mesoamericans developed ways of producing the pigment. During the Middle Ages, blue became the color associated with the Virgin Mary, thus signifying purity. Blue was the favorite color of painter Johannes Vermeer who used it so often, including in the Girl with a Pearl Earring, that he put his family in debt buying it. Even Picasso had his Blue Period when his paintings were done in varying shades of blue.

With apologies to Kermit the Frog, “It’s not easy being blue,” especially if you’re a plant.” You don’t see many true blue flowers. In fact, blue is the rarest flower color, found in only 10 percent of the roughly 280,000 flowering plants on earth. No, those blue orchids for sale in the supermarket don’t count. They’ve been dyed.

Why are there so few blue flowers? There is no blue pigment in plants. They don’t have a direct way of making the color blue. Plants have to resort to trickery using red anthocyanins and various modifications involving pH shifts and other sorcery. These modifications, along with light reflected through the pigments, create a color that looks blue.

Similarly, some plants employ a blue halo effect. When sunlight hits the tiny ridges on the thin waxy surface of some flowers, the ridges change how the light bounces back, thus affecting the color that bees and humans see. So, why do some plants go to so much trouble to produce blue flowers? Probably to attract specific pollinators. Blue, for example, is highly visible to bees.

When you’re out on the trails during the next few weeks, stop to appreciate the sky-blue Virginia bluebells, chicory, and bluets, as well as the dark bluish purple morning glories and dwarf delphiniums.