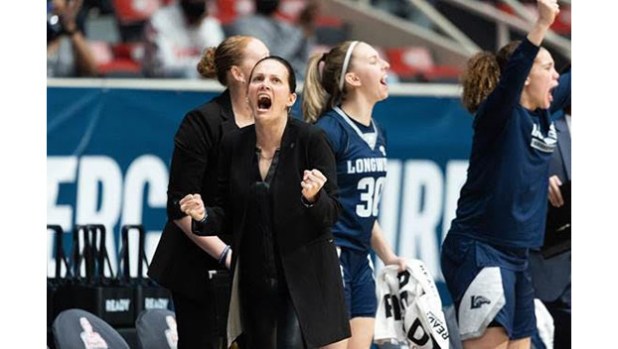 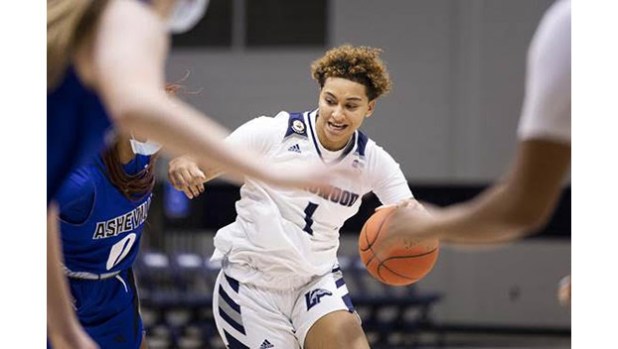 Less than an hour after the Longwood women’s basketball team filed off the bus and into the Dial Basketball Center on the campus of North Carolina State University, head coach Rebecca Tillett led off team practice with a pep talk about opportunity.

The opportunity that brought the Big South Tournament Champions two and half hours south of Farmville for their first-ever NCAA Tournament appearance. The opportunity to “see how the other half lives” on the home court of a storied basketball program. And the opportunity the 16th-seeded Lancers have when they face off against fellow No. 16 seed Mount St. Mary’s at 7 p.m. Thursday, in a game that will be televised nationally on ESPN2. The winner will face No. 1 seed and ACC Champion NC State (29-3) on Saturday.

“We’ve done all this work to be here in this beautiful practice facility,” Tillett told her team. “Now you have the chance to win an NCAA tournament game on national TV.”

As they arrived in Raleigh Tuesday, the Lancers were savoring every moment as they prepared to participate in the NCAA Women’s Basketball Tournament’s inaugural “First Four” matchup, an opportunity created by the women’s tournament expanding to 68 teams this year.

“This is something I’ve thought about since I was a kid – going to a tournament. I don’t want to miss a moment,” said Kyla McMakin, a junior guard from Virginia Beach who garnered All-Big South first team honors for a third straight year. “Since this is the first time, I really want to be able to remember it and enjoy it, especially with my best friends.”

The game will give a national audience a glimpse into the Longwood program’s special sisterhood and family bond that fans in Willett Hall have admired all season long. Nowhere is that spirit more visible than on the Lancer bench. With every basket, every block, every pick-and-roll and open layup, the bench explodes in joy, punctuating the moment with hugs and screams of encouragement.

“Our bench is hyped for everybody,” said McMakin. “That’s part of what makes us really good—the joy and love we have for everyone on the team. We celebrate everyone.”

Joy is one of the core values the team talks about frequently. So is family.

“The sisterhood is easy when you have one common goal,” said point guard Tra’Dayja Smith, the Big South Tournament MVP. “Coach Tillett emphasizes family, family, family. That’s what brought me to Longwood—because it’s like a family and the team acted so much like a family.”

Smith, a graduate student from Madisonville, Texas, was part of the first full recruiting class of players Tillett brought to Longwood to build the program. Bonding exercises for the team begin in the summer so that players begin to connect and build relationships well before the season officially starts.

“The joy that this group operates with is amazing,” Tillett said. “That is one of our core values. Any organization can say what its core values are, but you’ve got to live them. And this group lives joy at such a high level.”

To see that joy from the coach and her players now makes the program’s phenomenal transformation all the more poignant. That transformation has seen the Lancers improve from a 3-27 record in Tillet’s first season to a 14-11 mark and a third-place Big South finish last season, and finally to this year’s record-breaking run to the NCAA Tournament.

This year they finished 21-11 overall. More importantly, they enter the Tournament winners of nine straight, and 14 of their last 15. The turning point came after back-to-back conference losses in January. But Smith prophetically predicted the team could still win the Big South regular-season title — followed by Longwood’s best practice of the year and then the magical run that has now brought them to Raleigh.

“That for me as a coach, and our staff, that’s when we said this is something,” Tillett recalled. “We knew we just needed to stay the course and we are going to get there.”

For point guard Kennedy Calhoun, a freshman from Harrisburg, N.C., who made the Big South All-Freshman Team, the celebration on the court at Bojangles Coliseum in Charlotte after winning the Big South championship game epitomized what brought her to Longwood.

“You could see everyone was hungry. That was one of the things that drew me into this program,” said Calhoun. “Everybody was hungry to win a championship, and I wanted to be a part of that and something special.”

On Wednesday the Lancers had their first practice inside Jim Valvano Arena at Reynolds Coliseum in Raleigh. As the team prepares for Thursday’s game, Calhoun said their core values remain front and center. She said most of all she plans to not take the moment too seriously.

“I’m going to have fun, honestly. That’s what got us here,” she said. “Our joy, our love, our core values — stand on those. It’s something that we’ve all been working toward and dreaming about since we were little. We just want to go out there and have fun.”