Rainbow pools in the Cypress Swamp 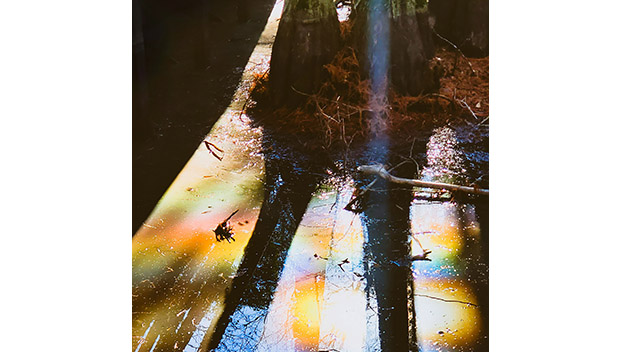 Oh, what luck to see the colors on the water in the swamp.

No matter when you visit, bald cypress swamps are magical places. In late spring and summer, there’s green everywhere – moss, resurrection ferns, tree leaves – all accented by silvery gray Spanish moss. In fall, the bald cypress needles turn brilliant hues of orange and red; the swamp seems to be on fire. In fall and winter, the swamp turns spooky. The bald cypress knees jut out of the water like alien creatures, and the veils of Spanish moss shroud everything in an air of mystery.

If you’re lucky enough to go at precisely the right time in early winter, you may be treated to a less spooky sight – bright rainbow colors on the black water in the swamp. It’s as if you’ve ventured into a fairyland. And what’s equally amazing is that most visitors to the swamp walk right by the rainbow display without noticing it.

What causes the light show on the water in the swamp? It’s a naturally occurring phenomenon that is observed most frequently in winter when there hasn’t been much rain, the water is very still, and the light is just right. It doesn’t happen every year, so there is some happenstance involved in observing it.

Scientists believe that the rainbow colors are caused by two agents. In fall, the bald cypresses shed their needles, which fall into the water and then release a small amount of oil that may coat the surface of the water. The colors can also be caused by the biological processes of anaerobic bacteria reducing iron in the soil below the water’s surface. This soil has very little oxygen in it, so the bacterial processes taking place in it don’t involve oxygen.

My most recent visit to First Landing State Park in December was full of surprises – resurrection ferns growing on the trunks of several bald cypresses, crested merganser ducks swimming in a secluded pond, a thicket of wild olive (Cartrema americana), a critically imperiled species found only in the vicinity of Cape Henry, and, yes, rainbow pools in the cypress swamp. It was a very good visit.