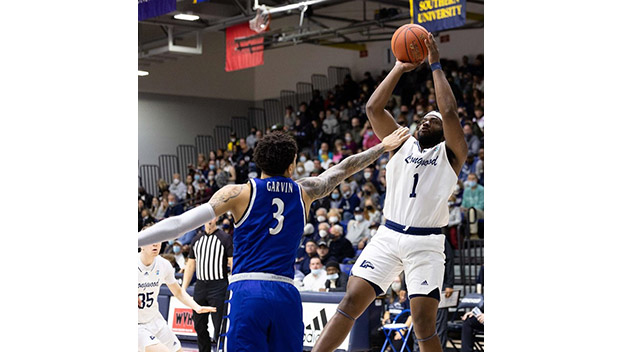 Isaiah Wilkins got them started. The senior helped bring them back from a first-half deficit. Then, after a career night, he sealed it in the final seconds.

Team after talented team keeps coming at a first-place Longwood mens basketball team on a historic run. But the Lancers keep answering the bell – and now stand within grasp of their biggest milestone yet: the Big South’s top spot heading into the tournament.

Wilkins scored a career-high 25 points, including two free throws to seal the game with 9.2 seconds left, and added nine rebounds Saturday as Longwood once again closed out a tight contest down the stretch to beat Hampton 76-72.

Longwood (21-6, 13-1 Big South) now needs to win just one of its final two regular-season games – Wednesday at home against Radford or next Saturday at Campbell – to clinch the league title and top seed in the Big South tournament. They’re already Northern Division champs. A loss by Winthrop would also give the Lancers the No. 1 seed.

“I was proud of them,” head coach Griff Aldrich said of his team after it won four of five games in a 10-day stretch. “That shows an amazing amount of toughness and resilience, to be able to get through a gauntlet like that.”

The winningest Division I basketball team in Virginia this season got an assist and a boost of energy from the now-customary deafening sixth-man student section in Willett Hall, where the Lancers are now 15-1 this season.

But there was no doubt who the hero was Saturday: the tough, sharp-shooting and seemingly unflappable senior Wilkins, a Wake Forest transfer. One of multiple Longwood offensive weapons who have stepped up during the Lancers’ tear through the conference, Wilkins is also the one who never looks less than perfectly cool when the game is on the line.

The Winston-Salem, N.C. native scored the Lancers first seven points, had a key rebound and lay-in late in the first half as Longwood rallied from a 6-point deficit, then iced the game after a furious Hampton comeback cut the lead to 2 and made Longwood fight through the finish line.

Almost nothing has come easy for the Lancers during their historic run – and this one was a lot tougher than Longwood’s 73-48 win at Hampton in the first of the teams’ two meetings in January. That game had been the only one of Longwood’s Big South victories that was wrapped up before the final minutes. Hampton’s Rio Haskett had a career night with 21 points and Russell Dean added 16 as the Pirates’ 3-point shooting made Longwood’s fans sweat through another frantic finish after it looked like they’d closed out the win in the final minutes.

Longwood was sharp early, but Hampton (8-17, 4-10) rallied and took its first lead 27-26 on a 3-pointer by Najee Garvin with 5:35 before intermission, and Longwood fell behind by as much as six. But the Lancers trimmed the deficit to one point in a frantic final minute before halftime, with Wilkins flying in for a rebound and put-back 40 seconds before intermission.

Longwood kept the momentum out of the locker room and started the second half on a 22-9 run that proved to be the difference. Justin Hill opened the second half with a 3-pointer that put Longwood back ahead 37-35, and Wilkins added a 3-pointer a minute later. On the next possession, Longwood missed a pair of shots but kept pulling down offensive rebounds until DeShaun Wade hit a triple to build the lead to nine. On the night the Lancers had 14 offensive boards, clearly dispiriting the visitors.

“Those are just big plays there, and they’re just mentally crushing to the defense,” Aldrich said. “You defend for 20 seconds, you feel like you’ve done a good job, and then boom.”