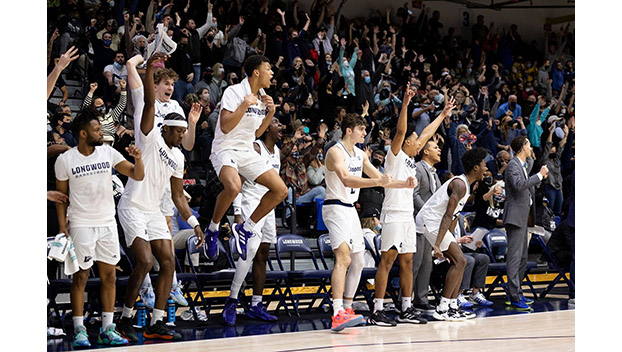 What was once the best-kept secret in mid-major basketball became national news Thursday night.

Big South unbeaten Longwood, playing on ESPNU from its home court in Willett Hall for the first time, took its coming-out party to the national stage with a history-making 85-72 win over USC Upstate.

Along with extending the nation’s sixth-longest active winning streak, the victory kept fourth-year head coach Griff Aldrich’s Lancers (18-5, 10-0 Big South) as one of only six teams in the nation without a conference loss, set a new Division I-era benchmark for the program with 18 wins, and extended what has become Longwood’s longest win streak since the 1993-94 Lancers’ 11-game tear nearly three decades ago.

Longwood earned all of those accolades in front of a sellout crowd and in the first nationally televised home game in school history, earning that spotlight by virtue of a season that has been nothing short of historic for the Commonwealth of Virginia’s breakout team of 2022.

“I usually don’t notice the crowd. I noticed it tonight,” said Aldrich, who coached in front of a sold-out Willett Hall for a second straight home game. “They were great. They gave our guys a lot of energy, and that was critical for us tonight playing a little shorthanded.”

The Spartans (10-13, 7-4 Big South), riding a Big South surge of their own, became the latest to succumb to that ever-swelling tide after the Lancers broke open a four-point game with an end-game surge that has become the team’s trademark. Sparked by senior guard Isaiah Wilkins’ three-pointer with 3:12 to play, Longwood closed out the clock on a 13-4 run and forced stops on five of USC Upstate’s final seven possessions.

And even without leading scorer Justin Hill and 10-point contributor Leslie Nkereuwem, Longwood’s Big South-leading offense topped 80 points for the 11th time and saw five players score in double figures. Leading that effort was senior guard DeShaun Wade, who scored 11 of his 23 points in the second half and delivered five of Longwood’s 11 three-pointers.

Those good shots were plentiful throughout the night as the Lancers shot .517 (30-of-58) from the floor and hit double-digit three-pointers for the fifth time this season. Wilkins knocked down four of those treys while Lliteras hit two of his own, and the strong-armed senior Watson was a near-perfect 6-of-7 from the floor.

Meanwhile, USC Upstate’s top-tier Big South offense – which entered the game ranked No. 4 in the Big South at 72.2 points per game and No. 1 in both three-point percentage and free throw percentage – shot just 5-of-18 from long range for their fewest triples in a conference game all season. Freshman guard Jordan Gainey led the way with 16 points, but the Lancers countered by scoring 16 points of their own off 14 Upstate turnovers.

Now with just six games remaining in Big South play, the Lancers will continue their downhill trek toward the 2022 Big South Championship tournament with a Saturday road trip to Greensboro, N.C., to face conference newcomer North Carolina A&T. That game tips off at 4 p.m. on ESPN+.