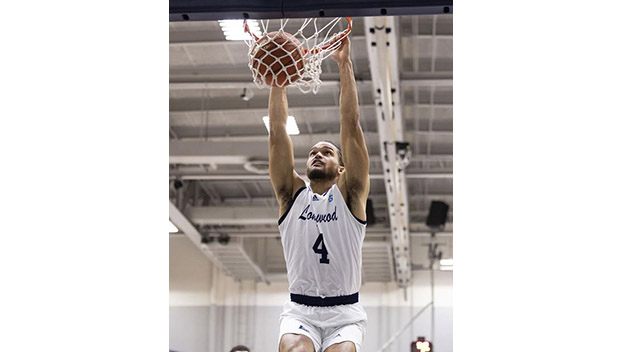 This time, they were far from home, with no sixth-man Willett Hall energy to fuel them. Talented UNC-Asheville was the latest opponent aiming for a signature win against the Big South’s top team.

It didn’t matter. DeShaun Wade provided the offensive spark with 17 points, Zac Watson had 10 points and six rebounds, and Longwood rode a dominant first half at both ends of the floor – then withstood a ferocious UNC-Asheville comeback bid in the second – to beat the Bulldogs 56-48 and remain unbeaten in the Big South.

The first half showed Longwood has the weapons on offense and defense to keep this special season going into March.

The second showed they can hang on to close out a win even when the shots aren’t falling.

“The first half was gorgeous,” head coach Griff Aldrich said. “It was an inconsistent game. It’s just something that we’re fighting as a team.”

But, he said, “winning on the road in conference, that’s great, I don’t care who you play, what conference, these are significant battles.”

Halfway through the Big South schedule, Longwood (16-5, 8-0) is riding its first-ever 9-game win streak of the Division I era.

The Lancers haven’t lost in in 2022 – and are one of just 15 teams left in the country unbeaten in conference play. They can stretch the win streak to 10 Saturday at Charleston-Southern – and then head home for the first ever ESPN home game in program history, next Thursday against USC Upstate.

After eight straight wins and two emotional home victories in the last week, Lancer fans might have wondered if this might be the night their luck and legs might finally run out. And they nearly did, with Longwood hitting just five shots in the second half as a 21-point halftime lead slipped to four in the final minute. But three of Longwood’s makes were 3-pointers, and the Lancers’ free-throw shooting and relentless on-the-ball defense once again closed out a Big South win.

On a night when Longwood shot just 21 percent from 3-point range and 31 percent from the floor, the Lancers managed 12 steals and dominated the glass, outrebounding an athletic Asheville team 44-30. The offensive rebound advantage was 18-7.

The first half was a clinic – maybe their bets 20 minutes of defense all season. During a 24-5 run over an 11-minute stretch, Longwood had five steals by five different players, 16 points in the paint and shut down nearly every offensive set for Asheville, who didn’t get above 10 points until 3:23 before halftime.

The first half “was just a dominant effort by our club and really playing with purpose,” Aldrich said. “That’s what we need to be consistent. We’re fighting for that. The guys are fighting for that, but we’re not quite there yet.”

Longwood led 34-15 at the break, despite shooting just 2-of-12 from behind the arc. They made up for it with dominant play in the paint, and by seeming to get their hands on the ball to disrupt almost every defense sequence the Bulldogs tried to run. Leslie Nkereuwem, who had just two points in Saturday’s 92-88 win over Winthrop, seemed to recover his confidence and energy, with 8 points on 4-for-4 shooting before halftime. Asheville didn’t get past 10 points until the 3:23 mark before the break.

As Longwood shooting touch disappeared in the second half, the Bulldogs chipped away, getting as close as 4 points at 52-48 on a driving layoff by Trent Stephney with 47 seconds remaining.

But if this Lancer team hasn’t yet been as consistent as Aldrich wants, they never seem to panic when the game is on the line. Wade calmly swished two free throws with 47 seconds left, followed by two more from Zac Watson after a key defensive rebound with 29 seconds to go. With that, the Lancers were clear to dribble out their ninth straight victory.

On a night when UNC-Asheville’s game plan largely held Longwood’s Justin Hill in check – the sophomore managed just 8 points after 29 Saturday against Winthrop – enough other players stepped up. None were more physical than Wilson. The senior was ferocious in the paint, stepping up after Longwood’s Leslie Nkereuwem – following a strong first half – left with an injury with just over eight minutes left.

“Zac’s an outstanding young man, business school guy, very bright, works extremely hard,” Aldrich said. “He made some incredible plays, and I think Zac played the last six minutes without a break, which is a lot. Then at the end of the game not only did he knock free throws down, he secured a huge rebound. We made plays at key times.”

With eight games remaining, Longwood is guaranteed an above-.500 regular-season finish for the first time since it joined the Big South a decade ago.

But if that was once a goal for Longwood men’s basketball, this team is way beyond that.

“This is the completion of the first half of the conference season,” Aldrich said. “To be 8-0 is an incredible accomplishment of the guys and testament to their hard work and belief in themselves. Now we get to start over.”