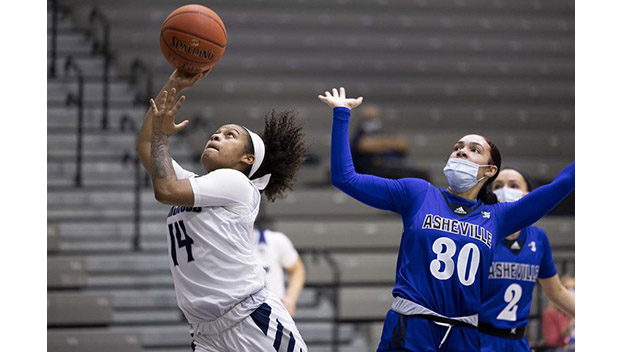 Tra’dayja Smith goes up for a shot. (Photo by Mike Kropf)

After a week off, it was USC Upstate who had the best of Longwood in the final minutes on Tuesday taking the victory home to South Carolina 76-69. The game came down to the wire, but junior forward Molly Coleman and red-shirt sophomore guard Chellia Watson led USC Upstate and combined for almost half of the Spartans points to grab the win.

Watson has been the leading scorer for the Spartans, who are really taking off in conference play. This is her fourth game in a row with double-digits, the previous three games in a row being 20 points or more. From the point position she also went 8-12 from the field and 6-7 from the free throw line to finish with game-high 23.

“I think Upstate played great as everyone that’s been watching them in the league knows they would,” said Longwood head coach Rebecca Tillett. “They made a huge jump from last season, and it’s pretty obvious. They played us close last year so we were anticipating a really good game today.”

Coleman demonstrated her upperclassmen leadership by stringing her fourth game in a row with double digit scoring, grabbing 13 against the Lancers (7-10, 4-2 Big South). Before fouling out early in the fourth quarter, she grabbed the team high of eight rebounds and added one block.

Freshman standout Rachel Rose also showed her tenacity and hunger on offense and defense for the Spartans (11-4, 3-1 Big South). Rose had 15, making it her fifth game straight in double-digit scoring, while also grabbing seven rebounds, three assists, and three steals. Rose went 5-6 from both the field and free throw line, while the team shot .826 from the line and .491 from the field.

“I think we know what’s going on for us and we have people on the team working hard to fix the problems,” said Tillett. “Leadership tactics and how we as a team approach the things that need work needs work. In the second half, we saw those leaders on the team doing their part but sometimes in the process when trying to fix an issue you just don’t get the result you always want.”

A big second quarter helped USC Upstate take a nine-point lead at the half. Upstate pushed the lead to 11, but the Lancers rallied to trim the lead down to one possession multiple times in the fourth quarter.

For Longwood, Kyla McMakin was a standout, marking her sixth straight game with double-digits while going 5-5 from the free throw line. She finished with 21 points, two assists and four rebounds. Joining McMakin on the score panel, it was Tra’Dayja Smith who cashed in four from behind the arc to finish with 12 points, four assists, and one steal. Those four threes added to Longwood’s total of 11 on the day, making it their new single game high.

Adriana Shipp provided a spark off the bench and came out hot, nailing a three immediately before going 2-3 from behind the arc in the first half. Shipp finished in double-digits with 12 alongside McMakin and Smith. – her fourth time this season doing so. Ship also had five rebounds and added two assists.

“We couldn’t hold them today and that’s going to be something we think about until the next time we play them. We hit more than ten threes for the first time this season, and we have to shoot a lot more than we normally would in the third and fourth quarter,” said Tillet. “One thing I know, is that this team knows what they are capable of doing, and I think it’s going to take the whole team to find a way to overcome this difficult stuff.”

Despite different standouts on offense for the Lancers, Longwood was unable to get the win in the final minutes, chaining together its second loss in a row. A big week is ahead for the Lancers, packing in three games over the next seven days. This weekend its two home games – one on Saturday against Gardner-Webb at 3 p.m., the other on Sunday against Winthrop at 3 p.m., and the last on the road next Tuesday against High Point.