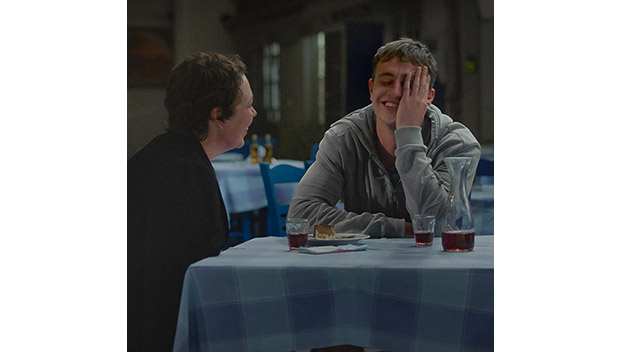 Paul Mescal and Olivia Colman talking at a table in The Lost Daughter.

Another year back in beautiful Middleburg for the Middleburg Film Festival, an event that continues to grow and get better and better every year. This year’s schedule is so strong, I was having my own Sophie’s Choice over which movies to view at what time. But one thing was for sure, The Lost Daughter was always at the top of my list. And I was not disappointed; it is not only one of my favorite films I saw at the Festival, it is also one of my favorite films of the year.

It is hard to believe that this is Maggie Gyllenhaal’s feature screenwriting and directorial debut because it feels like a filmmaker’s masterwork. The sound design, cinematography, script and performances are all perfection and I haven’t been able to stop thinking and talking about the movie since I saw it. I can’t imagine what the rest of Gyllenhaal’s career behind the camera is going to look like with her first film being this strong.

Based off the novel by Elena Ferrante, the story follows Leda (Olivia Colman), a language professor who is enjoying a working holiday in Greece. What starts as an idyllic time eating Cornetto ice cream, relaxing on the beach, and chatting with the handsome waiter Will (Paul Mescal), soon turns into chaos when she meets a large American family also vacationing in her little slice of heaven. The family members are rowdy, rude and likely have ties to criminal elements.

But despite Leda’s annoyance with this intrusion, she becomes fascinated with observing Nina (Dakota Johnson), a young mother in the family. The relationship between Nina and her daughter conjures memories of Leda’s own difficult time as a young mother (Jessie Buckley) balancing raising two young girls with maintaining her career. These recollections begin to take a physical and emotional toll on Leda as she slowly unveils her past and what happened to her two daughters.

The Lost Daughter is a powerful and brave portrayal of motherhood and womanhood from a perspective we never get to see onscreen, one that focuses more on a woman’s love of herself than one solely focused on her love for her children. Without getting into spoilers (because I think the reveal with Leda is important), Gyllenhaal’s ability to make what could be seen as controversial, unexpected themes of self-love actually relatable. Lesser filmmakers would present the film’s subject, Leda, as an utterly flawed individual. But Gyllenhaal flips this idea on its head, showing that instead of being “flawed” based on the world’s standards, Leda actually found her own liberation from gender norms. Instead of glossing over the hard stuff, Gyllenhaal lingers in these difficult scenes, highlighting the moments that brought Leda to this position, including her innermost desires to be seen for the brilliant woman that she is.

Just when you think Olivia Colman cannot get any better, in comes her unpredictable, yet brilliant performance in The Lost Daughter. Can this woman do anything wrong? She has the uncanny ability to make you laugh out loud one second, cringe another and finally cry your eyes out… usually with just one look. I was immediately invested in Leda’s story because Colman is so enchanting, and have been thinking about her in this film for the past four days and comparing every other performance I see to her; I think I will continue to for the rest of the year. There is zero chance that she is forgotten this awards season.

Dakota Johnson is almost unrecognizable, disappearing into her role as the enigmatic Nina. Johnson is such a captivating actress and I am immediately drawn to her whenever she is onscreen. Her chemistry with Colman is off the charts, despite having few scenes with direct conversations between the two. In a Q&A with Johnson after the film, she spoke about the mysterious relationship between her character and Colman’s, “Are they going to talk? Are they going to see each other in each other? Are they going to fight? Are they going to have sex? You have no idea what is going to happen.” I couldn’t have said it better myself. The tension built between this complicated back and forth with the two women, accentuated by their longing glances, makes the scenes of them actually interacting even more electrifying.

Jessie Buckley syncs perfectly with Colman and it is her performance that really showcases the backstory of Leda and how she got from an in-over-her-head working mother to the woman enjoying a picturesque vacation in Greece. And believe me, it isn’t pretty. A lot of the film’s heavier moments rest on Buckley’s shoulders and she absolutely knocks it out of the park. Johnson disclosed that Colman and Buckley didn’t really go over their shared character before or during the film’s production, which is especially shocking because the two women gave such complementary, amazing performances. But what else should I expect from these two powerhouses? I also want to give a huge shoutout to the scene-stealing Dagmara Domiczyk, who masterfully plays the shady matriarch of the rowdy family, going toe-to-toe with Colman in the most delicious of scenes.

The Lost Daughter is an absolute triumph and I am so glad that Netflix saw the value in distributing an original film like this on a subject that some could view as taboo. I want you to go into this movie knowing as little as possible and let the themes and ideas wash over you. It is a movie that is going to stick with you for awhile in the way that any great art piece does, and maybe even make you think twice about how society speaks about motherhood and the female experience.

The Lost Daughter will be in theaters Dec. 17, and on Netflix Dec. 31.