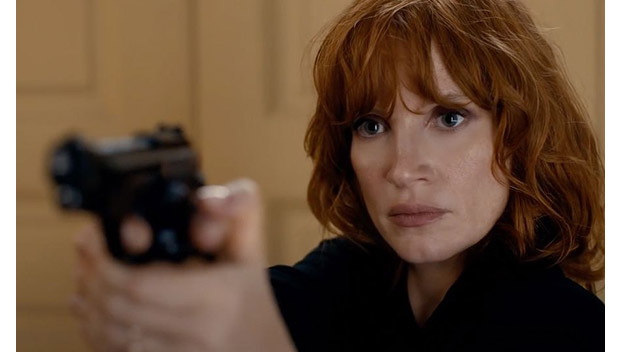 Jessica Chastain with a gun in The 355.

The 355, produced by Jessica Chastain and her company Freckle Films, gets its name from “Agent 355,” the first female spy’s code name during the American Revolution. It checks almost all of the boxes I want to see in a spy movie. It has a team-up of incredible, kickass actresses from around the world that have amazing collective chemistry, big budget action scenes, and a story with actual stakes that make the characters think twice about their decisions. It also does not pull any punches, pulling off more gritty and violent scenes than you may be anticipating from a PG-13 movie.

Unfortunately, there are still notable script issues that prevent THE 355 from being at the level of Chastain’s other spy classics, Zero Dark Thirty and The Debit. For an espionage thriller, the film is very predictable and lacks some of the cerebral cat and mouse games we have come to expect from the genre. So much so, you will likely be able to see a lot of the big “twists” coming from a mile away. Not only that, at almost two hours, the film is a bit too long and threatens to overstay its welcome. Still, despite its problems, The 355 is an entertaining action film that had me rooting for our impressive cast of characters from beginning to end.

The 355 film follows Mace (Chastain), a CIA officer that has chosen her career over pretty much every other thing in her life, including maintaining friendships and building a family. The closest person in her life is fellow officer Nick (Sebastian Stan), who is both a friend and a potential lover. The two officers are tasked with grabbing a doomsday decryption device that is able to unlock and give the user access to any system in the world, including banking networks, airline equipment and security systems. But when the initial mission fails, it is up to Mace to use her international connections to get the device back.

While Mace’s recruitment of longtime colleague and former MI-6 cyber expert Khadija (Lupita Nyong’o) goes fairly easily, enlisting German BND officer Marie (Diane Kruger) is going to take some serious :ahem: grit. And Colombian intelligence officer Graciela (Penelope Cruz) would much rather be at home with her family than on a dangerous mission. But the group of women, plus the late addition of mysterious Chinese MSS agent Lin (Fan Bingbing), quickly become a team worthy of their moniker “The 355” and are ready to take on the baddies who are seeking to bring the world to its knees.

Of course I have to talk about the incredible female-led cast, which I have seen some criticize for being gimmicky, but in my opinion is a breath of fresh air in the male-dominated action thriller genre. I love that each character got her time to shine and that the filmmakers were not afraid to use subtitles when each character was speaking her native language. One of my biggest pet peeves is when characters from non-English speaking countries are talking to each other in English and The 355 tackled that issue from the very beginning.

It was also clear that the film did not skimp on the action or CGI budget. The film is at its best when the four women are trying to initially suss each other out and figure out who can be trusted. Diane Kruger and Jessica Chastain have especially great chemistry, battling it out in some of favorite fight scenes I have seen on-screen in a long time. I also loved Chastain’s relationship with Sebastian Stan, which I shipped from the very beginning… though I wish his character and Édgar Ramírez had been a little more developed, a criticism we usually hurl about female characters in male-led action movies. It would have been nice if we had a good counter-argument to display from this film.

Chastain is one of Hollywood’s greatest chameleons, seamlessly transitioning between her role as the go-to spy thriller action hero and jaw dropping, unrecognizable performances in films like The Eyes of Tammy Faye and The Help. Her ability to disappear into such a diverse array of roles not only showcases her enormous talent, but also her determination to never be typecast. On top of that, she uses her star power to get movies made that feature diverse, female-led casts like The 355. Her stellar reputation led her to assemble an almost AVENGERS-level cast of the most charismatic and popular actresses in Hollywood and I am so here for the next projects Freckle Films has coming our way.

The 355 is not going to be the most memorable spy movie you have ever seen, but it is entertaining enough in the January movie release doldrums.