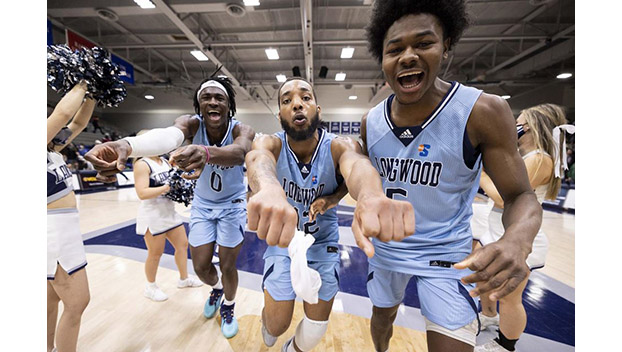 The Longwood Men’s Basketball defense was impenetrable on Monday night and paved the way for a 73-48 win over Hampton.

The win, which was Longwood’s fifth straight conference win and sixth overall, continues the best start to a season for the Lancers (13-5, 5-0 Big South) in the team’s NCAA Division I history. With Winthrop’s loss to High Point, the Lancers are the lone team undefeated in Big South play remaining.

The Big South’s second-best defense in points per game allowed held Hampton to .364 shooting from the floor and only 48 points, the fourth time the team has given up less than 50 this season. In the first half, Longwood only gave up 12 points in the final 18 minutes of the half after Hampton had taken a 5-2 lead in the first two minutes.

“We had a real focus on execution both offensively and defensively,” said Longwood head coach Griff Aldrich, whose team has won five straight conference games for a second straight season. “And I thought that, absent the first minute and a half of the game where we started a little sluggish, I thought we put together a real dominant performance on the defensive end which led to a lot of our transition baskets and good offensive possessions. I really thought the guys played with purpose tonight, and I think it really showed.”

Meanwhile, Justin Hill and Isaiah Wilkins led a balanced attack that saw nine players score in the game, with eight doing so in the first half. Hill ripped off 20 points by repeatedly plunging into the paint and attacking the rim, and the sophomore has now scored 20 or more in back-to-back games and three times in five conference games. Meanwhile, Wilkins added 11 as a playmaker, and Nate Lliteras had nine while DeShaun Wade had eight. Jaylani Darden added seven.

“It really frees you up,” Aldrich said of having so many players put points on the board. “One of the problems when you have a short bench or a shorter rotation, is that guys get tired defensively. So having guys like Nate Lliteras and Jaylani Darden be able to come in and contribute in a meaningful way, it really allows some of the other guys to really not have to bear the brunt of the minutes, especially on a two-day turnaround. We really got some good minutes from Nate. He did a great job. I thought Jaylani was very impactful, really under control, and executed probably the best he’s executed all season.”

For Hampton, Najee Garvin led the way with 15 points, but it took him 19 shots to do it. The Pirates only hit seven shots in the first half while shooting .250 (7-28) from the floor as the Lancers were dialed in following a nail-biting win over Presbyterian on Saturday night.

“I think the guys are really understanding,” Aldrich said about how his team’s focus on execution. “I didn’t think tonight was a completely clean game, but relative to our other conference games, we were more consistent tonight than we had been previously. And I think the guys understood when we weren’t clean, what it looks like when we’re executing and what it looks like when we’re not executing.”

In the first half, Wade kickstarted a 12-0 Longwood run with a three that tied the game at five, and the Lancers never trailed again after Lliteras canned a straightaway three for an 8-5 lead. The defense made sure of it. The team held Hampton without a point for multiple four-minute stretches and slowly extended the lead to double digits with eight minutes to go in the half.

Longwood heads back home for a two-game homestand on Wednesday, Jan. 26 and Saturday, Jan. 29. First, the Lancers host North Carolina A&T State at 7 p.m. on Wednesday night before taking on Winthrop on Saturday at 7 p.m.