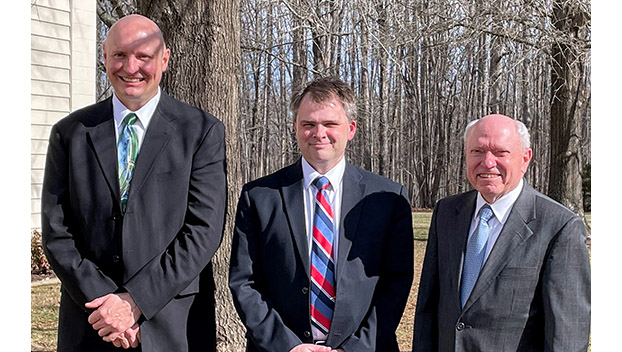 A new branch presidency was sustained in the Sandy River Branch of The Church of Jesus Christ of Latter-day Saints on Sunday, Jan. 23. From left are First Counselor Jarett Bodnarik; Branch President Brent Roberts and Second Counselor Val Hilton.

After over six years of faithful and dedicated service, Scott Lewis has been released as Branch President of the Sandy River Branch of The Church of Jesus Christ of Latter-day Saints.

In The Church of Jesus Christ of Latter-day Saints, all positions in local congregations, including leadership, are fulfilled on a voluntary basis.

The role of the Branch President, similar to that of Bishop for larger Church congregations, is to take responsibility for the overall temporal and spiritual affairs of the congregation, with a special focus on ministering to the youth and caring for those in need.

Through a process of prayer and seeking God’s will, regional leaders select a member of the congregation to serve as Branch President. The new leadership is then presented to the congregation for a sustaining vote.

Among immediate priorities for the new branch presidency is to prepare members and friends for the open house of the Washington, DC, Temple, which will be open to the public for the first time since its original dedication in 1974. Prior to its rededication on June 19, the temple will be open for public tours from April 28-June 4. See http://dctemple.org for details.

Weekly worship services are open to the public. All are invited. Sacrament meeting begins at 10 a.m. each Sunday. The chapel is located at 400 6th St., in Burkeville.