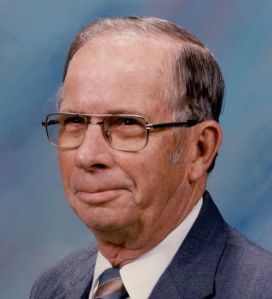 With heavy hearts, the family of John Thomas Atkinson Sr., of Crewe, announces his passing Jan. 8, on the day of his 96 birthday.

John was born in Nottoway County, Jan. 8, 1926 to Samuel and Rosalie Owen Atkinson. He was one of fifteen children raised on a tobacco farm. He attended Nottoway High School and served in the army during WWII and immediately after the surrender of Japan. He was married to Alice Verser Atkinson. A member of the greatest generation, he wholeheartedly gave his life to his country, his family and his work. John spent most of his work career as a conductor on the Norfolk and Western Railroad.

A man small in stature but large in spirit, John’s life long passion was the care and maintenance of his home and family. He took enormous pride in his lush green lawn and his Azaleas. He taught his sons, John Jr. and Robert, the life skills of fiscal responsibility, the value of hard work and the love of family. For a man so small in stature, he was incredibly strong and resilient. During his life, he survived two brain tumors, a concussion, colon cancer, prostate cancer, a broken back, COVID 19 and multiple trips to the ER for High Blood Pressure. Throughout all these adversities, he never complained and his standard reply on his condition, even in the ER under tough circumstances, was, “Feeling pretty good for an old man.”

John is predeceased by his parents; his wife, Alice and all but one sibling.

Family and friends will meet at the Puckett Funeral Home on Jan. 30, at 1 p.m., before proceeding to the Crewe Cemetery for a memorial service there at 3 p.m.

The family wishes to thank the Woodland of Farmville, Centra Hospital, Centra Hospice, The Crewe Medical Center and Dr. Clay Hall for the support and care of both John and Alice in their final years. Additionally, we would like to thank John’s nieces, Penny Huskey and Daphne Norton, for their support of both John and Alice over the years, and especially Penny for her support over the last few weeks.

Both John Jr. and Robert agree, they could not have been blessed with any better parents in both John Sr. and their mother, Alice.

In lieu of flowers, please consider a donation to your favorite charity.