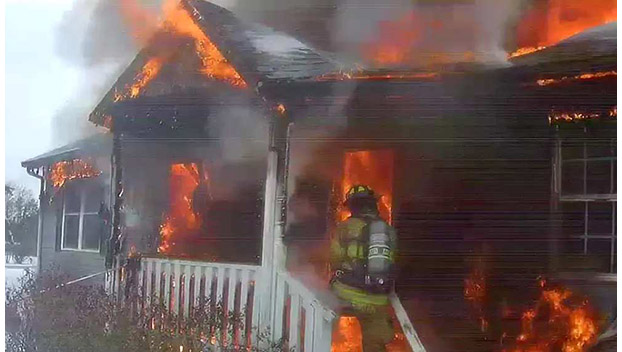 Crews responded Wednesday, Jan. 5, to a house fire in Cumberland. According to Cumberland Volunteer Fire Department (CVFD) officials, crews were dispatched to the 100 block of Goshen Road in Cumberland for smoke coming from a house. Units arrived within eight minutes of dispatch to find a house fully involved in fire. Crews were able to knock down the majority of the fire within 30 minutes of arrival. Officials stated an extensive overhaul was required due to a partial roof collapse. Crews operated on scene for approximately three hours before returning to service. No one was home at the time of the fire and the cause of fire is believed to be electrical in nature. “Power had just been restored in the area prior to the fire being reported so we believe there may have been an electrical surge in the home which started the fire,” Deputy Chief Ben Pfeiffer told The Herald. Units that responded were Engine 24, Tanker 22, Tanker 23 and Utility 25. Units from Deep Creek Volunteer Fire Department, Cartersville Volunteer Fire Department and Macon District Volunteer Fire Department Company 3 also assisted with putting the fire out.